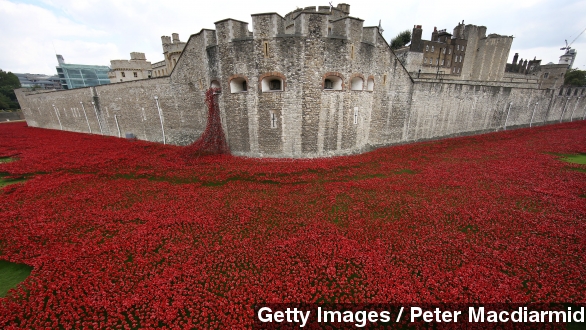 The field of poppies around the Tower of London will be removed on November 12 despite calls from multiple politicians to extend the installation.

The nearly 900,000 ceramic poppies planted at the Tower of London will be removed on November 12th as planned, despite calls from multiple politicians to leave them standing.

Volunteers have been progressively filling the Tower's moat in the lead up to Britain's Remembrance Day. At its peak on November 11, there will be 888,246 poppies — one for each British soldier killed during World War 1.

The installation, named Blood Swept Lands and Seas of Red, has been wildly popular. According to The Telegraph around 4 million people will visit the memorial during its 98-day run.

A team of 11,000 volunteers will begin dismantling the display on November 12. The poppies have already been sold for £25, or around $45, each — the proceeds will be split between six charities benefiting veterans and their families.

But London Mayor Boris Johnson, obviously keen to keep such a popular tourist attraction in his city, had called for the installation to stay up past November 12.

But officials from Historic Royal Palaces insisted Thursday it will come down as planned. Artist Paul Cummins told the BBC taking it down will be a shame, but that was the plan all along.

The Royal British Legion says it hopes the sale will raise more than £15 million, or around $24 million.