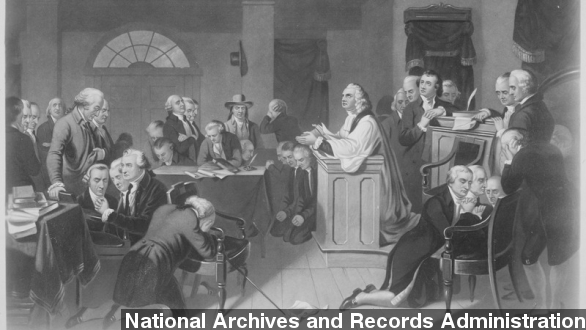 The Supreme Court heard oral arguments in a case brought by two women who say their town meetings endorse Christianity.

Is tradition enough to justify prayer at government meetings?

The Supreme Court is hearing oral arguments in Town of Greece, New York versus Galloway — brought by two women who say invocations at town-board meetings in their small New York town reflected Christian themes. (Via WSYX)

"Attorneys didn't ask for the prayers to stop, instead arguing the prayers should get rid of language that could be offensive to people of other faiths." (Via WOOD)

The Washington Times' Matthew Lounsberry calls it "one of the biggest religious freedom cases in years."

The women — who are Jewish and atheist — say it's mostly Christian clergy that would deliver prayers at town meetings. (Via WNCN)

But a ruling by the high court could have pretty far-reaching implications.

Prayers are often offered in Congress and state legislatures around the country. (Via YouTube / StFrancisBakersfield)

In fact the Supreme Court itself opens with the words, "God save the United States and this honorable court."

And USA Today's Richard Wolf is one of many to notice neither liberal nor conservative justices seemed interested in getting into the business of regulating legislative prayer during Wednesday's oral arguments.

Obama appointee Justice Elena Kagan, for example, at one point said, "...every time the court gets involved in things like this, it seems to make the problem worse rather than better." (Via Supreme Court of the United States)

A 1983 case has already upheld the general concept of legislative prayer, but it's the fact Greece town meetings are using mostly Christian clergy delivering sectarian prayer that makes this case unique. (Via WICU)

But it seems the only real solution would see government essentially creating restrictions for prayer — or of course — banning prayer completely at government meetings. There didn't appear to be appetite for either from the justices. A ruling in the case isn't expected until June of 2014.