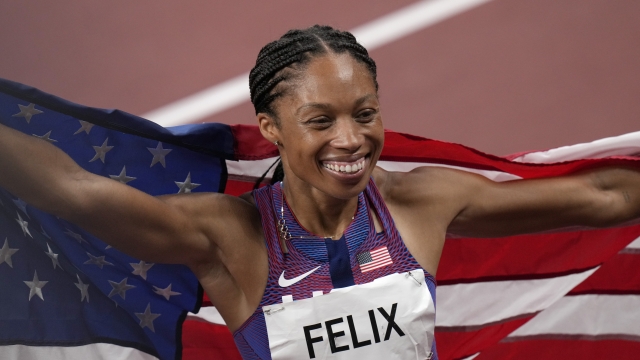 She's now the most decorated U.S. woman in Olympics track and field history after winning her 10th medal.

The new medal standard in Olympic women's track has been set. American Allyson Felix stands alone at the top and still has a chance to go even higher.

The 35-year-old Felix won her record 10th Olympic track medal Friday night at the Tokyo Games with a push down the home stretch of the 400 meters to take the bronze medal.

After Simone Biles Spoke Up, What's Next For Mental Health And Sports?

After Simone Biles spoke up about her mental health, the sports world is examining how it can advance its investment in athletes' well-being.

Felix now has more Olympic track and field medals than any woman in history in a career that dates back to 2004 in Athens.

She came to Tokyo even with Jamaican runner Merlene Ottey.

Her 10th medal also ties her with the great Carl Lewis for the most by an American athlete. She could break that Saturday when she's expected to run in the 1,600-relay.