Tracking Americans In Syria Is A Very Tough Task 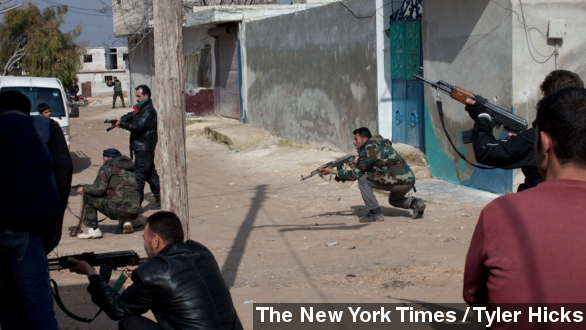 Estimates of the number of Americans fighting in Syria range from dozens to hundreds. Experts say it's impossible to determine an exact number.

We've heard a lot of conflicting numbers regarding the number of Americans believed to be fighting alongside ISIS.​

REP. MIKE ROGERS TO FOX NEWS: "It's in the hundreds that we believe have at least [at] one time traveled and participated and trained with them."

In July, U.S. Attorney General Eric Holder offered a much lower estimate. "Dozens" of Americans, he said, were fighting in Syria. (Video via NBC)

It's tough to say who's right. That's because it's nearly impossible for the U.S. to accurately determine how many Americans have joined up with ISIS. (Video via ODN)

First, you have to distinguish between the number of Americans who have gone to fight with Syria's U.S.-backed moderate rebels and those fighting with ISIS. That job falls to the FBI. (Video via Shahba Press)

BOB ORR, CBS HOMELAND SECURITY CORRESPONDENT: "The FBI really, despite the lore out there, isn't an MI5. They're not outfitted to follow every suspect 24 hours a day, seven days a week."

Another challenge: As The Daily Beast notes, ISIS recruits don't always fit the typical profile — that is, antisocial young men in their early 20s and 30s who have had previous run-ins with the law.

While that did appear to be the case for self-styled American jihadists Douglas McCain and Troy Kastigar, the same couldn't be said for this 33-year-old Detroit woman U.S. officials say recently died fighting in Syria.

Foreign Policy makes an interesting point. Even if these Americans aren't jihadists when they arrive in Syria, there's a good chance they'll be radicalized sometime after getting there. "At this rate, the foreign fighter flow into Syria looks set to extend the life of the jihadi movement by a generation."

The fear, of course, is those American passport holders could sneak back into the U.S. undetected and carry out an attack on the homeland using what they learned from ISIS.

Of course, Americans aren't the only ones traveling to Syria. As The Economist illustrates with this graph, although the majority of foreign fighters in Syria are from Arab states, a sizable number are believed to have come from Western European nations.

According to international consulting firm The Soufan Group, of the 12,000 foreign fighters it estimates have traveled to Syria, about 3,000 are from Western countries.

The group adds the numbers are often underestimated.The reason? "Would-be foreign fighters who wish to keep their activities secret have little trouble in getting to Syria without anyone knowing, and while there can conceal their identities."

​For some comparison, Foreign Policy points out the conflict in Afghanistan in the 1980s didn't attract nearly as many foreign fighters — reportedly no more than 4,000 at any time.