The Anatomy Of A Trade War 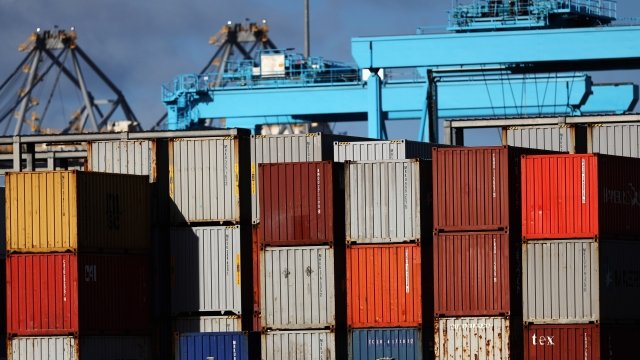 Tariffs can be a double-edged sword for companies and farmers at home.

To explain a trade war, we first need to understand what tariffs are.

I know, for some, the thought of an economics lesson isn't the most riveting activity, but tariff battles are important and can have huge ramifications. I promise we'll keep it short.

Simply put, a tariff is tax on imports or exports. More commonly, you're taxing another country's goods coming into yours.

So let's focus on the more common one: tariffs on imports. They serve multiple purposes. Since it's a tax, it means the government gets more money from imports up front — at least at first.

Trump Says The US Has A $500B Trade Deficit With China. It Doesn't.

And tariffs can help domestic companies compete with foreigners or be a bargaining chip to help a country secure better trade deals if that country believes it's being mistreated. President Donald Trump is trying to use them as a negotiating tool in NAFTA talks with Canada and Mexico.

Advocates of tariffs say they save jobs and protect American companies from foreign rivals.

So let's say the U.S. slaps a tariff on sneakers made in China. American shoemakers would at least initially benefit. That's because tariffs boost prices on comparatively less expensive foreign goods, making it easier for consumers to buy domestic goods.

But it could be a double-edged sword. Critics say that move could stifle domestic innovation. The lack of international competition might even eventually raise sneaker prices at home.

Plus, what if China responds by levying a tariff on U.S. agricultural goods like cotton, wheat or soybeans? That could hurt American farmers because they benefit from those exports to China.

And you can see where this could head: a tit for tat on trade. America hits back with another tariff, then China responds, then America, then China — and you've got yourself a trade war.

And, worst case scenario, some fear these economic entanglements could ultimately result in a military conflict.

There are several examples of protectionist measures failing. Let's open up our history books to 1930. Congress enacted the Hawley-Smoot Tariff Act, sponsored by Rep. W.C. Hawley and Sen. Reed Smoot, against the advice of many economists.

The tariffs were intended to help U.S. farmers during a glut in the American agricultural market. But the tariffs were expanded to other industries, and the move backfired. European countries imposed countermeasures, and global trade plummeted. Critics say it made the Great Depression even worse.

So, President Trump may argue "trade wars are good, and easy to win," but history says otherwise.

And there you have it. See? That wasn't so taxing, was it?