Traffic Deaths Are At Record Numbers. What's To Blame? 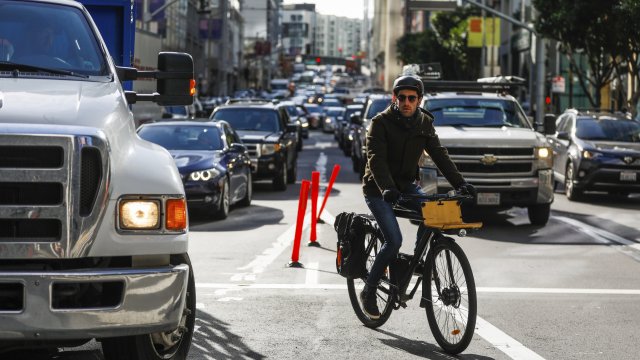 Paying attention to streets is becoming critically important these days because of how dangerous they have become for drivers, pedestrians and bicyclists alike.

Newsy spoke to Beth Osborne, the director of advocacy group Transportation for America, to better understand the record-breaking number of both traffic deaths and pedestrian fatalities in recent years.

"Over the last two years, fatalities for everyone using the roadways is going in the wrong direction, and we didn't start off in a good place," Osborne said.

Close to 43,000 people died in a traffic crash in 2021, according to the National Highway Traffic Safety Administration. That's up from about 39,000 deaths in 2020, and trends for the current year show the problem is only getting worse.

In 2022, early estimates from the NHTSA showed more than 9,500 people were killed in traffic crashes within the first three months of the year. The figure represents the highest number of first-quarter fatalities in 20 years.

Experts like Osborne blame these deaths on a number of factors, including the recent rise in speeding and other dangerous driving behaviors, inadequate infrastructure, and roads historically designed for vehicle speed instead of safety.

"We were coming up with ways to build big separated highways that connect cities, and we were making up standards for them based on the best available information at the time," Osborne said. "Often the road is designed for a higher speed than the posted speed, and humans are just very suggestible when it comes to design. People will always follow the design before they will follow the posted speed, which doesn't communicate with them as much. That sign only comes up periodically. The design is ubiquitous."

One critique from experts is that U.S. roadways are just too wide. Research shows road designs that include smaller block sizes, frequent street connections and narrower streets can help bring down traffic accidents and fatalities. Adding elements like proper signs, speed bumps, curb extensions and raised pedestrian crossings also bring down risk for people on our roadways.

Traffic deaths in the U.S. rose 10.5% last year, according to the National Highway Traffic Safety Administration.

Experts say the U.S. needs to do much better on those elements, keep working to improve the overall quality of roadways and revisit speed laws to bring them to a safer limit.

These factors not only make driving more dangerous but also put bicyclists and pedestrians at greater risk. Each year about 2% of fatalities in motor vehicle crashes are people on bicycles.

U.S. pedestrian deaths in 2021 were the highest in four decades, with an average of 20 deaths a day, according to the Governors Highway Safety Association. That's nearly 7,500 pedestrians killed last year, a 12% rise from 2020.

Data for 2022 was not yet available, but experts say it has likely risen just like overall traffic deaths.

Research finds older people, people in lower income areas, and people of color have been disproportionately impacted by these fatalities.

"People of color are more likely to have to move around without a vehicle," Osborne said. "That is a huge expense to put on people, and because of the way we design our communities and our roadways, they often have to be utilized for people to go very short distances, even three or four blocks. Therefore, we design people's lives where every single trip, no matter how short, requires a car, and then we use that as an excuse to build the roadways only for cars because they inevitably get clogged up when you build your communities that way."

So, how can we fix this issue?

For one, the Biden administration unveiled a National Roadway Safety Strategy earlier this year with the long-term goal of ending roadway fatalities entirely. Through this plan, the administration hopes to facilitate safe travel by rethinking road designs and speed limits, as well as improving post-crash emergency medical care.