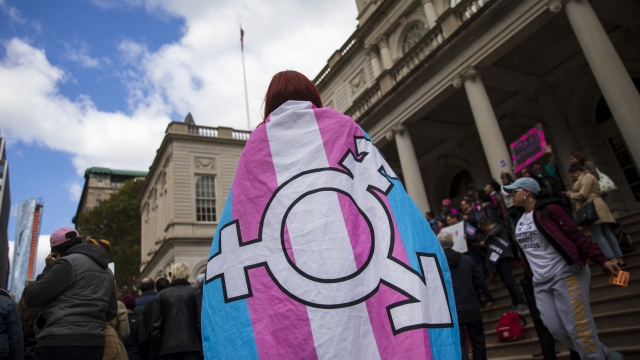 Human Rights Campaign and CNN will host a presidential town hall on October 10. Part of the event will likely focus on trans issues.

LGBTQ advocates say transgender rights and justice will likely be a key topic during a historic presidential town hall in October.

"We want to make sure that in this town hall the presidential candidates are really given the opportunity to speak directly to the concerns of LGBTQ voters across America," said Lucas Acosta who is a national press secretary for Human Rights Campaign.

At least nine Democratic presidential candidates are planning to attend the event in Los Angeles hosted by the Human Rights Campaign and CNN. Advocates expect a discussion on a wide range of issues including immigration, access to health care and civil rights for the LGBTQ community.  Acosta also anticipates candidates to touch on the challenges facing transgender people and violence against trans women of color.

"Some of the top line issues that we're anticipating having some sort of discussion about are violence facing black trans women in America. Right now, I think today about 18 black trans women have been murdered across the country largely due to violence spurred because of their identity," Acosta added.

The Human Rights Campaign recently announced a focus on equality and justice for transgender people through economic empowerment, legislation and public education. Some queer grassroots activists like Firas Nasr say the candidates and national organizations need to go even further to address the issue of sex work.

If you had to sum up your platform and pitch it to one of the 2020 Democratic candidates what would you say?

"I would love to see candidates explicitly advocating for sex work [number] one," said Firas Nasr, a founding organizer for Werk For Peace. "And two, explicitly centering the queer and trans community in large issues like climate justice, immigration [and] racial justice."

Nasr is part of a group called Werk For Peace which uses dancing as a tool to draw attention to queer and trans issues.

Some Democratic candidates like Senator Kamala Harris, Senator Cory Booker and Representative Tulsi Gabbard have said they would support decriminalizing sex work. The Human Rights Campaign has also put its support behind legalization bills in New York and Washington, D.C.

Many Democratic presidential candidates do however agree on more broad proposals such as the Equality Act, which would extend federal civil rights protections to LGBTQ Americans. The House passed the legislation earlier this year.

Despite the many challenges the LGBTQ community faces, organizers say the event will be historic and a major leap forward.

"We want to be able to explore the large top tier issues that are facing every American from an LGBTQ lens," Acosta said.