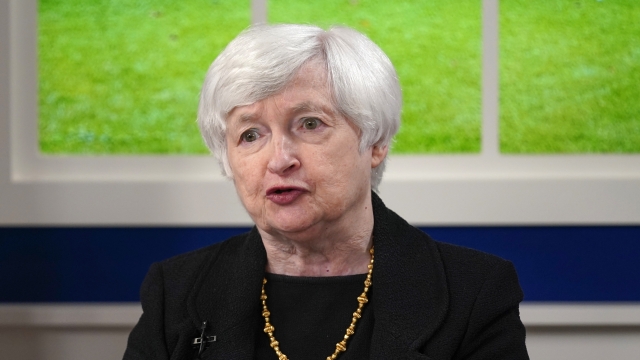 Treasury Secretary Janet Yellen is urging Congress to raise or suspend the debt limit by Dec. 15 or the U.S. risks defaulting on its bills.

Treasury Secretary Janet Yellen told Congress Tuesday that she believed she would run out of maneuvering room to avoid the nation's first-ever default soon after Dec. 15.

In a letter to congressional leaders, Yellen said that she believed Treasury could be left with insufficient resources to keep financing the government beyond Dec. 15.

Yellen's new date is 12 days later than the Dec. 3 date she provided in a letter to Congress on Oct. 18. That letter was based on the fact that Congress had just passed a $480 billion increase in the debt limit as a stop-gap measure.

The 2021 deficit was an improvement from the all-time high of more than $3 trillion reached in budget year 2020.

Yellen has repeatedly warned that failure to deal with the debt limit and allowing the government to default would be catastrophic and likely push the country into a recession.

In her letter, Yellen said that the extra time reflected more up-to-date estimates of government revenues and spending and also was impacted by the infrastructure bill that President Joe Biden signed into law on Monday. That legislation requires the transfer by Treasury of $118 billion by Dec. 15 into the Highway Trust Fund.

Yellen said after that while she had a "high degree of confidence she will be able to finance the U.S. government through Dec. 15" and complete the highway trust fund transfer, there are scenarios where the government will be left with insufficient resources to finance operations beyond the Dec. 15 date, she said.

The need to raise or suspend the debt limit is just one of the budget issues facing Congress. Lawmakers must also approve a budget by Dec. 3 when the current stop-gap funding measures runs out. Failure to do that would trigger a government shutdown.

And Democrats are aiming to approve a $1.75 trillion measure to expand the social safety net and deal with climate change threats. Speaker Nancy Pelosi has said she hopes the House can pass this measure, which Republicans oppose, this week. It must also pass the Senate.