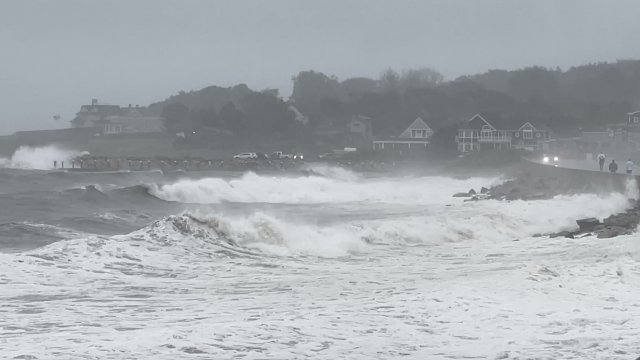 Tropical storm Henri has made landfall along the northeast, bringing harsh winds and strong currents to towns near the shore.

Henri's winds are really moving ashore. We're going to see wind gusts of up to 70 miles per hour and they are kicking-up those white caps. All along the Rhode Island coast line, officials are concerned about storm surge because of those waves.

Crews blocking the main coastal road through Narragansett, fearing up to five feet of storm surge may breach the storm wall.  Tourists, young and old, venturing out. Witnessing Henri's fury.

"The waves are slamming over the seawall," Narragansett resident, Vin Mancini, said.

Vin and his friends never seeing a storm like this. It's been 30 years since hurricane Bob hit this region, killing 18 people.  Henri's winds snapping trees. Firefighters checking on downed power lines. Tens of thousands of people without power.

These winds are not only going to cause storm surge issues, there's gonna be concerns about power outages throughout New England for several days.