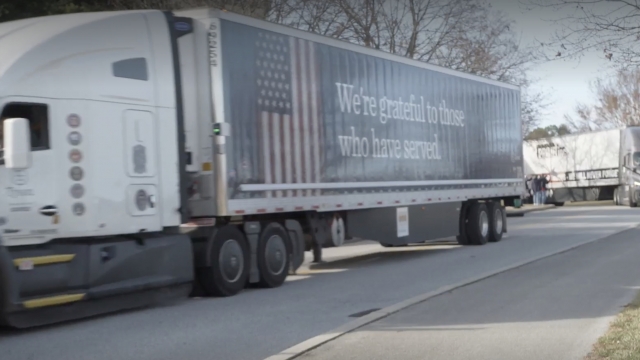 The Wreaths Across America program coordinates a wreath-laying ceremony every December at 3,100 locations in the U.S. and abroad.

The nation's fallen heroes were honored at Arlington National Cemetery over the weekend with wreaths laid at each headstone, meant to commemorate their legacy. The Wreaths Across America program started laying wreaths at Arlington 30 years ago.

For a group of volunteer truck drivers, the journey started in Maine, hitting six states and Washington, D.C., along the way.

The Best Holiday Lights And Decor From Coast To Coast

Newsy's Jason Bellini takes a look at some of the best holiday light displays at homes around the country.

"This is the best load that I haul every year," James D. Walker said.

The wreaths are sponsored and paid for by families and complete strangers to honor the nation's fallen heroes. For Walker, a truck driver and veteran, the journey is personal. His son Jeffrey died in combat in Iraq in 2007.

Newsy caught up with the group in Delaware, where event organizers were honoring service members just like Walker's son.

For many of these volunteers, it's not just about the haul. It's about the journey, the people they meet along the way and the little things that keep them going.

"When I first pulled into those gates on Saturday, it was breathtaking," truck driver John Ritscher said. "You feel so much pride."