Trudeau's 'Soft Power' Might Be On The Rise, But It Has Its Critics 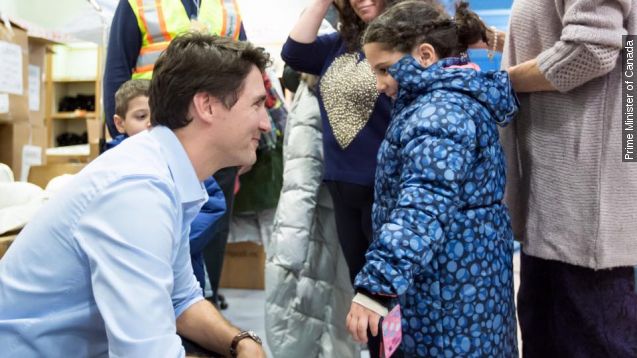 Canada's previous PM was hawkish, which makes sense because he's a conservative. Now that Canada has a liberal PM — is it going back to soft power?

Is Canada getting back into its "soft power" groove?

This guy came up with the idea in the late 1980s — Joseph Nye. Soft power is the ability of one country to influence others by example instead of with force. Essentially — a less hawkish foreign policy approach.

Canada has been hailed as a peacekeeping nation since as far back as the 1950s when then-PM Lester Pearson helped resolve the Suez Crisis between Egypt and Israel.

Yet, some believed Canada was starting to stray from this under the 9-year-command of former Canadian Conservative Prime Minister Stephen Harper.

"So make no mistake, by fighting this enemy here you are protecting Canadians at home," Former Prime Minister Stephen Harper said while visiting Canadian troops in Kuwait.

Newly-elected Liberal PM Justin Trudeau, on the other hand, seems to be reining it back in. But soft power has its critics, too.

Trudeau is pulling Canada’s air power from the fight against ISIS.

While he plans on increasing humanitarian aid and the training of local forces, some have criticized the withdrawal at a time when they say it’s needed most to keep ISIS in check.

Still, as of a November 10 poll, Trudeau’s popularity keeps surging. Apparently soft power is popular in Canada — for now.