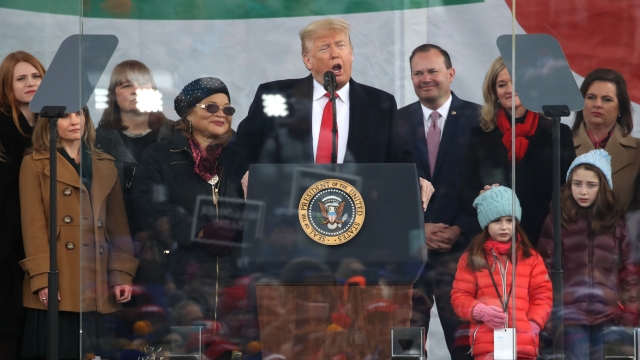 The president took the stage at the anti-abortion event Friday just before attendees started their march from the National Mall to the Supreme Court.

"It is my profound honor to be the first president in history to attend the March for Life," President Trump said.

He took the stage at the anti-abortion event Friday just before attendees started their march from the National Mall to the Supreme Court.

"All of us here today understand an eternal truth: Every child is a precious and sacred gift from God. Together, we must protect, cherish and defend the dignity and the sanctity of every human life," he said.

During his speech, President Trump expressed his support for the movement, praised the charity work of activists and cited his administration's anti-abortion initiatives — including the issuing of a rule that effectively bans abortions at facilities that receive federal family planning funding.

"Unborn children have never had a stronger defender in the White House," President Trump said.

He also talked about taking decisive action to protect the "conscience" and religious rights of health care providers.

"Religious liberty has been under attack all over the world, and frankly very strongly attacked in our nation. You see it better than anyone. But we are stopping it," he said.

The march takes place every year near the anniversary of Roe vs. Wade to protest the legalization of abortion. Organizers say they'll keep holding the event annually until Roe is overturned.