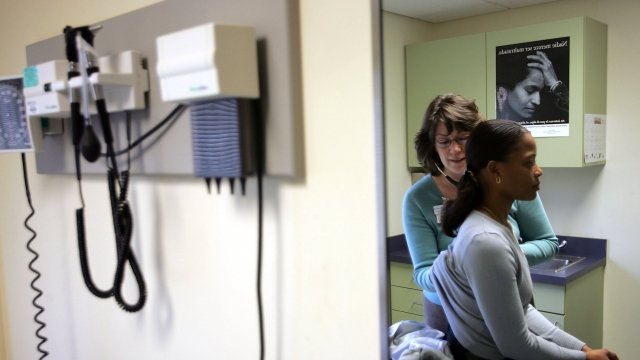 Health care groups and patient advocates say the new plans will end up costing consumers more and will do more damage to the already shaky markets.

The Trump administration dealt another blow to Obamacare this week by rolling back restrictions on short-term health insurance plans.

The Department of Health and Human Services finalized a new rule on Wednesday that will make it easier for Americans to get cheap, bare-bones short-term health insurance plans.

"These kinds of plans will be, hopefully attractive to individuals who are in transition between jobs, individuals who are waiting for their first job and don’t have any employer coverage yet," Health and Human Services Secretary Alex Azar told Newsy's Kellan Howell in an interview. "Individuals who are part of a gig economy who are contractors who aren’t getting insurance through their employer, folks who have three part time jobs and don’t get any insurance through them or just folks who are in parts of the country where the Obamacare insurance is too expensive or not available, doesn’t have choice, doesn’t cover the doctors or the hospitals that they need to get coverage with."

Under the Affordable Care Act, short-term insurance was meant to be a stopgap that wouldn't last more than three months. But starting in October, insurers will be able to extend that window to offer plans covering consumers for nearly 12 months, with the option to extend for up to 36 months.

And the cheaper options are not required to cover things like prescription drugs, maternity care or people with pre-existing conditions.

"The simple fact is these short term, limited-duration plans would be offered for about 50 to 80 percent cheaper than an Affordable Care Act exchange plan would cost," Azar said. "So, that's a real opportunity for millions of Americans who've been priced out of the Affordable Care Act individual market."

Patient advocates and health care groups say it's dangerous for people to rely on the expanded, stripped-down plans because they don't provide comprehensive health coverage.

"There's really no rules with them. So we're back to the wild wild west of health care or health insurance coverage," said Anne DiGiulio, national manager for lung health policy at the American Lung Association.

"So, there's going to be situations where you might go to fill a prescription and realize you don’t have a prescription drug benefit. There was one [example] we looked at when the rule was being proposed that didn't cover anything having to do with any pre-existing condition you had. They can be medically underwritten, so if you have a pre-existing condition they might charge you more, if you're a woman they could charge you more."

And critics worry the lower price tag on the expanded short-term plans will attract younger, healthier Americans who don't need comprehensive coverage. That could mean sicker Americans who remain in the the Obamacare exchanges will end up paying higher premiums.

In a statement, Justine Handelman, the senior vice president of Blue Cross Blue Shield Association’s Office of Policy and Representation, said, “Health insurance should be available and affordable for everyone, regardless of their health status. …  Steps also should be taken to prevent cherry-picking that separates the healthiest of customers from those with significant medical needs, raising the cost of comprehensive coverage for all who want the greater security it provides.”

The navigator program helps people sign up for the Affordable Care Act.

The Centers for Medicare and Medicaid services expects as many as 600,000 people to buy the new insurance policies next year, with enrollment increasing to 1.6 million by 2022.

Azar says the plans might not be right for everyone, but the goal is to expand choices for Americans who are struggling to afford health care.

"We believe, let the people decide. It's a choice, it's not a forced action. The days of us here in Washington telling people what insurance they have to buy and what meets their needs ought to be over," Azar said.