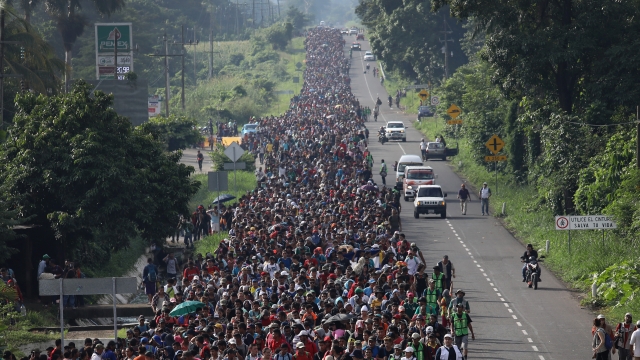 The Trump administration is reportedly considering imposing a travel ban against Guatemala if the country doesn't help curb the number of migrants traveling to the U.S., according to an NPR report.

Guatemala President Jimmy Morales filed an appeal Wednesday after Guatemala's Constitutional Court issued an injunction to block him from signing the Safe Third-Country Agreement with the U.S. Morales blamed the court for damaging Guatemala's "good relationship" with the U.S.

Under the agreement, Central American migrants traveling to the U.S. would be forced to apply for asylum in Guatemala instead. There's concern the country won't be able to handle the influx of migrants coming in.

President Donald Trump threatened to punish Guatemala for not going through with the deal. On Twitter Tuesday, the president said "Now we are looking at the "BAN," Tariffs, Remittance Fees, or all of the above."

"So we'll either do tariffs or we'll do something," President Trump told reporters Wednesday. "We're looking at something very severe with respect to Guatemala."

The president's threats mirror similar ones he made toward Mexico not too long ago. President Trump said he would impose tariffs on Mexican imports if the country didn't help curb illegal immigration. He dropped the tariffs after coming to an agreement with Mexico.