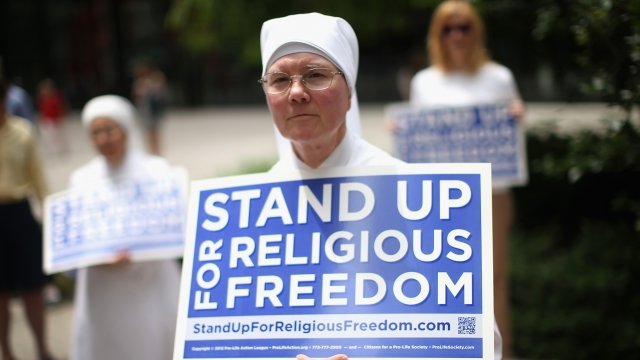 New rules expand the types of entities that can claim moral or religious exemptions to Obamacare's contraceptive mandate.

The Trump administration is relaxing an Obama-era rule requiring most employer-offered health insurance plans to include no-cost coverage for birth control.

The Departments of Health and Human Services, Treasury and Labor announced two new rules Friday. The rules expand the types of entities that can claim moral or religious exemptions to the so-called birth control mandate.

The administration says the rules are meant to balance government interests in promoting coverage for contraception and in protecting individuals and entities with "sincerely held" religious or moral beliefs on certain health care issues.

HHS says the exemptions might only impact "about 200 entities" that have filed lawsuits against the mandate. The department says the change will only affect a small percentage of women in the U.S.

Still, the National Women's Law Center says the rules could give employers license to discriminate and said it will sue. The American Civil Liberties Union echoed that sentiment.