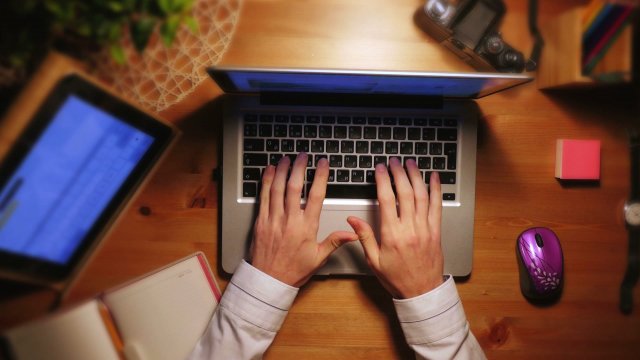 Despite the growth of remote work in the private sector, federal departments are scaling back telework.

The Trump administration is scaling back remote work in various departments. It started in the Agriculture Department last year, followed by the EPA, Education and Health and Human Services departments. It's in contrast to what we think of as our modern workplace, especially since private companies are increasingly giving employees this flexibility. About 24% of private-sector employees teleworked in 2018. So why this contrast?

Lisa Rein, a Washington Post reporter, said: "The Trump administration feels like it's just too hard to really determine if people are working when they're when they're working at home. And that is generally their view. And that's the view of other people, too. I mean, I think telework is a really interesting policy because it's controversial."

The administration wants to hold more employees accountable, but reporter Lisa Rein's article states there isn't conclusive data to prove whether remote work increases or decreases productivity. Managers she spoke to said accountability is hard when employees are not in the same room. But employees disagree.

Rein: "Federal employees really love telework. They feel like it's a great perk of the job that they have had for years ... . They're really upset and frustrated, that telework has been canceled or, well, scaled back at their agencies."

Rein also mentioned that the administration wants to put more authority in the hands of managers instead of workers and the unions that represent them.

Rein: "A lot of telework policies have been the subject of union negotiations. And so for that reason, you know, the administration in the White House issued a series of new rules basically giving management more authority in collective bargaining discussion."

The federal government's shift on remote work isn't abnormal. Research shows that while many workers — especially millennials — prefer flexible work options, and many companies are embracing this. Large companies like Yahoo!, IBM, and Bank of America have been cutting back on it so that teams can collaborate more effectively. Meanwhile, even startups have struggled to enforce structure around remote work and are removing it.While the results of a Stanford study found that remote work can lead to higher individual productivity, other studies like this one from MIT show face-to-face communication leads to better team performance. It's important to note that the administration isn't getting rid of remote work altogether. A 2010 law prevents it from doing so. Rein says this topic is divisive, but it's a necessary conversation to continue about how best to do work that extends from the smallest companies all the way to the White House.

Rein: "People have very strong feelings about telework either way… I think these are all questions just for the American workplace generally, that are really interesting to be thinking about now."