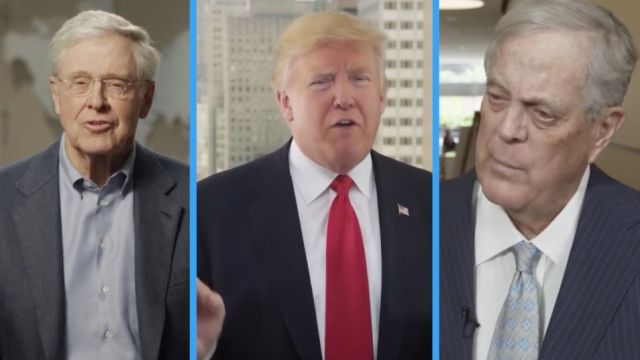 Reports say the Koch brothers are trying to meet with Donald Trump and vice versa, but both camps are saying they are turning the other down.

The Koch brothers and Donald Trump have something in common — other than being wealthy conservatives.

Both camps are saying they turned down meetings with the other.

The Koch brothers — heads of Koch Industries — are historically heavyweight donors for Republican candidates. But they've kept their purse strings shut to Trump.

"It's a very interesting list of who's in and who's out at the Koch brothers' big show, but Donald Trump is definitely out," Lawrence O'Donnell said on MSNBC.

There's been multiple rumors that Trump's camp has been trying to woo the wealthy business brothers and vice versa.

And on Saturday, Trump tweeted that he turned them down.

His tweet read, "I turned down a meeting with Charles and David Koch. Much better for them to meet with the puppets of politics, they will do much better!"

That was after Politico reported Friday that several Trump donors were turned away after trying to set up a meeting with the Koch brothers.

Hundreds of network donors for the Koch brothers met during the weekend, but Trump apparently didn't make the cut. Although, several prospective U.S. senators were there.

Trump has seemed to shy away from the Koch brother's money as well. Last year, the GOP nominee tweeted, "I really like the Koch Brothers ... but I don't want their money or anything else from them. Cannot influence Trump!"

And if you're wondering if Charles and David Koch will just sit this presidential vote out, don't be so sure.

"So, is it possible another Clinton might be better than another Republican?" Jonathan Karl asked.