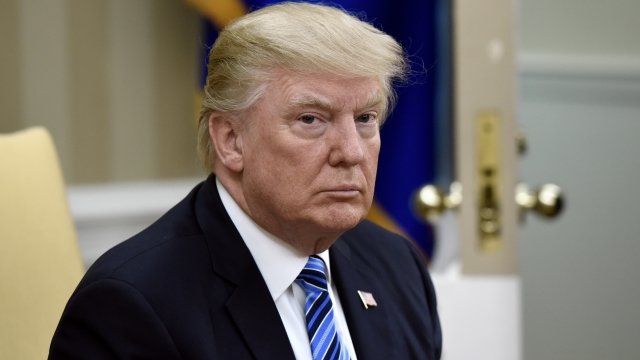 Trump said the strike would be carried out in coordination with the U.K. and France.

As Trump was speaking, there were reports of explosions in and around the capital city of Damascus. CNN reports aircraft and ships were involved in the strikes.

Trump questioned Iran and Russia, two close backers of Assad, for their continued support even after reports of multiple chemical weapons attacks on Syrian civilians.

Trump called Assad a "dictator" and a "monster." He also called the recent reported chemical attack on Douma "evil" and "despicable."

Trump said the strikes are intended to be a deterrent for further uses of chemical weapons. He said the U.S. and its allies were "prepared to sustain this response until the Syrian regime stops its use of prohibited chemical agents."

Both British Prime Minister Theresa May and French President Emmanuel Macron released statements following Trump's announcement. Macron said the strikes targeted the "clandestine chemical arsenal of the Syrian regime." May said the strikes should not come as a surprise and that "the Syrian Regime has a history of using chemical weapons against its own people."

Those targets were chosen to diminish Assad's ability to both produce and use chemical weapons. They were also chosen to mitigate any collateral damage. In a statement, Defense Secretary Jim Mattis confirmed evidence that proved the use of chlorine gas in Douma was acquired yesterday.

There have been no immediate reports of U.S. casualties.