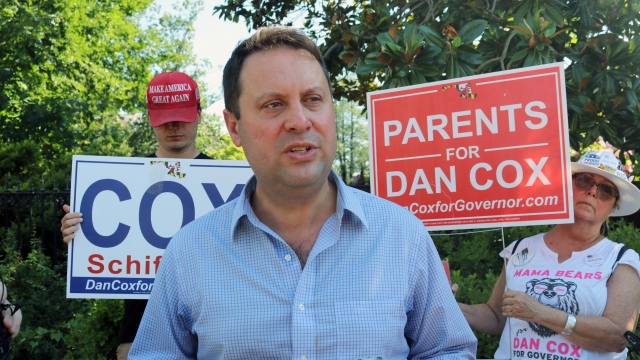 Despite being a win for Trump, Cox's victory over former Hogan Cabinet member Kelly Schulz could be a blow to Republicans in November.

Cox will face the winner of the highly competitive Democratic primary in the November general election. Wes Moore, a bestselling author backed by Oprah Winfrey, had an early lead Tuesday night, with the focus starting to turn to mail ballots that won't be counted until later in the week.

Despite being a win for Trump, Cox's victory over former Hogan Cabinet member Kelly Schulz could be a blow to Republican chances to hold on to the governor's mansion in November. Hogan, who was prohibited from running for a third consecutive term, was a rare two-term Republican governor in a heavily Democratic state, and he had endorsed Schulz as the successor to his bipartisan style of leadership.

Cox has been a thorn in Hogan's side over the last few years, suing over the governor's stay-at-home orders and regulations in the early days of the pandemic and seeking unsuccessfully to impeach him for COVID-19 orders Cox called "restrictive and protracted."

Cox alluded to his fight with Hogan in his victory speech Tuesday night, telling a cheering crowd: "We will never again give over our bodies, our churches and our businesses to a lockdown state."

The Republican primary was viewed as a proxy battle between Trump and Hogan, who offered vastly different visions of the party's future as they consider 2024 campaigns for the White House. Hogan, one of Trump's most prominent GOP critics, urged the party to move on from his divisive brand of politics, while Trump spent much of his post-presidency elevating candidates who promote his lies about a stolen 2020 election.

One of those candidates was Cox, who organized busloads of protesters to Washington for the "Stop the Steal" rally that preceded the Jan. 6 insurrection at the U.S. Capitol. Cox has also said President Joe Biden's victory shouldn't have been certified and tweeted that former Vice President Mike Pence was a "traitor." Cox later deleted the tweet and apologized.

Democrats were likely giddy over Cox's win in the Republican primary. The Democratic Governors Association plowed more than $1 million behind an ad intended to boost Cox, seeing him as an easier opponent in November.

Trump, too, was gleeful, saying in a statement shortly before the race was called: "RINO Larry Hogan's Endorsement doesn't seem to be working out so well for his heavily favored candidate. Next, I'd love to see Larry run for President!"

Cox joins Doug Mastriano in Pennsylvania and Darren Bailey in Illinois as ultraconservative state legislators endorsed by Trump who have gone on to win their Republican nominations for governor. All three fought against their governors' COVID-19 policies, staunchly oppose abortion rights and raised questions about the legitimacy of the 2020 election.

In Maryland, it could potentially take days, or even longer, to determine the winners in the most closely contested races, including the Democratic primary for governor. Maryland law prohibits counties from opening mail ballots until the Thursday after election day.

In one of the earliest called races of the night, Democratic Sen. Chris Van Hollen beat back a primary challenge just months after suffering a minor stroke. He is favored in November to win a second term against Republican Chris Chaffee, who launched a failed congressional bid in 2014.

Baltimore State's Attorney Marilyn Mosby, who is awaiting trial on federal criminal charges, was trailing in early returns in her three-way Democratic primary as she seeks a third term.

Mosby is charged with perjury and making false statements on loan applications to purchase properties in Florida. She rose to national prominence in 2015 when she pursued criminal charges against six police officers in the death of Freddie Gray, a Black man who suffered a spinal injury after police handcuffed, shackled and placed him head-first into a van. None of the officers was convicted.

Laura Kretchman, a 41-year-old high school teacher, said she voted for Moore, swayed in part by his endorsement from the state's teachers union. She said she's impressed by Moore's accomplishments after rising above childhood challenges and being raised by a single mom.

"I teach children at a school that also come from difficult upbringings, so I'd like to see maybe what he can bring to helping those students that are struggling and challenged," said Kretchman, an Annapolis resident.

Other voters said they preferred a long resume of government service. That's why Curtis Fatig, 67, voted for Perez. "He's not a newcomer," Fatig said.

Cox's victory on Tuesday serves as a win for Trump, who has a mixed endorsement record in this year's midterm elections. But in such a heavily Democratic state, his candidate faces an uphill battle heading into the fall.

Some Republican voters said Trump's endorsement persuaded them to vote for Cox. Others said it didn't matter.

David Gateau, 63, said he voted for Cox because he believes "Maryland is extremely liberal and we need to get back to some values." Trump's endorsement, he said, wasn't really a factor.

"I think Hogan was more of a RINO than he was a Republican governor, and I think our state reflects that," Gateau said.

Cameron Martin, 22, said Trump's endorsement was the "main reason" he voted for Cox, but added that he feels like Cox shares his Republican values and that "he will best represent me."

Candidates were on the ballot for all 188 seats in the Maryland General Assembly, which is controlled by Democrats.

The Maryland primary was delayed by three weeks because of lawsuits challenging the state's congressional and state legislative maps.