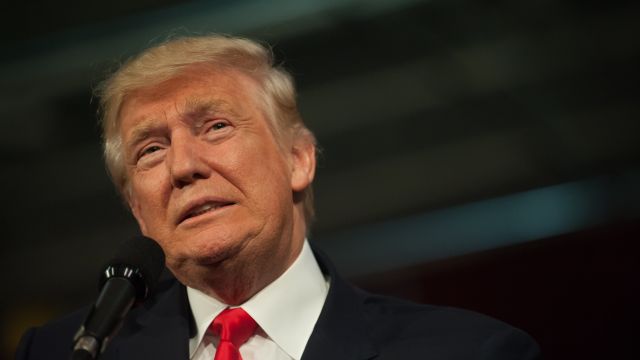 Donald Trump thinks Hillary Clinton might be behind the recent string of women who've accused him of sexual assault.

Trump told radio host Mike Gallagher, "They were made up — I don't know, for fame, or Clinton got them to do it, or for whatever reason you know, the women that came out."

SEE MORE: Between Clinton And Trump, Some Choose To Swap Their Vote Instead

He went on to say, "They have people from 20 years ago coming out and telling stories about me. Many of them have already been debunked. It's really an incredible thing that something like that happened."

Trump's theory incorporates two of his main defenses against the allegations: that they were fabricated and that they're part of a vast Clinton-powered conspiracy against him.

He told a crowd at a rally in Florida, "They're pure fiction, and they're outright lies."

And at a rally in New Hampshire, he said, "The election is being rigged by corrupt media pushing complete falsehoods and outright lies."

Following the publication of some of Trump's obscene remarks about women, several women came forward to accuse Trump of grabbing or kissing them. Trump's campaign has hotly contested each allegation.

The Trump campaign's efforts to dismantle the assault allegations has also distracted them from focusing on similar claims against Bill Clinton.

Before the second debate, Trump tried to accuse Hillary Clinton of enabling sexual misconduct by intimidating her husband's accusers into silence. The allegations against Trump have taken the spotlight off of those claims.

Juanita Broaddrick, one of the women accusing Bill Clinton of assault, told CNN she might be sympathetic to Trump's accusers. But Broaddrick and at least one more of Bill Clinton's accusers still plan to vote for Trump.