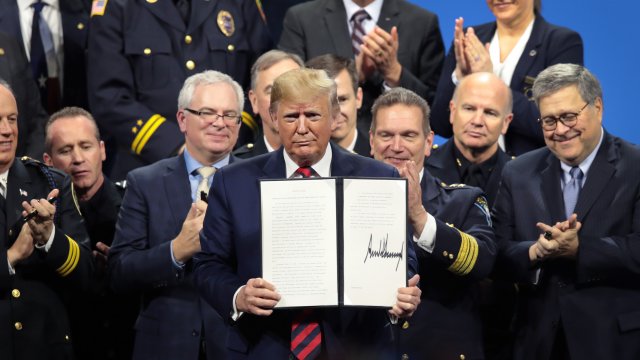 President Trump covered a lot of ground during his speech, including sanctuary cities, consent decrees and CPD Superintendent Eddie Johnson.

President Trump just finished speaking to the International Association of Chiefs of Police here in Chicago, Illinois. This is his first time speaking here in Chicago as president of the United States. Last time he was here, he was essentially run out of town by protesters clashing with Trump supporters during a campaign rally at the University of Illinois Chicago's campus.

Now, he covered a lot of ground during this speech, getting into sanctuary cities, consent decrees and Superintendent Eddie Johnson.

Superintendent Eddie Johnson of the Chicago Police Department said he wouldn't attend the speech because he doesn't agree with President Trump's rhetoric and believes it goes against the city's core values and his personal values.

President Trump: "And Eddie Johnson wants to talk about values. No, people like Johnson put criminals and illegal aliens before the citizens of Chicago, and those are his values. And frankly those values, to me, are a disgrace."

In regards to sanctuary cities, he's calling for local PDs like the Chicago Police Department to comply with ICE detainee requests. And in regards to consent decrees, he mentioned he does not believe they work.

He said: "My administration has also curtailed the harmful and intrusive use of federal consent decrees, which wrongly give meddlesome officials in Washington, D.C. immense authority to tie down local police departments and make it very difficult to do their work."

Now, protests have already started, and they're expecting 20,000 protesters outside of Trump Tower. For Newsy, I'm Jamal Andress.