The Trump Campaign Is Making Changes, But Will They Stick? 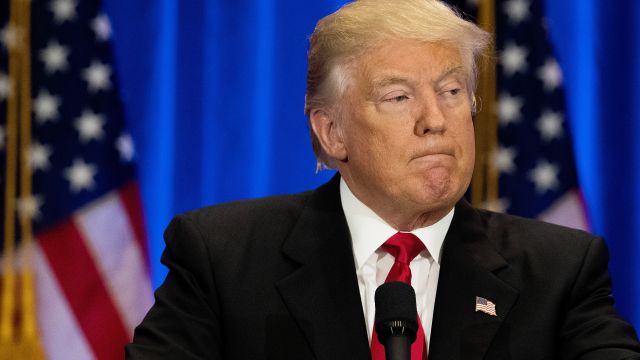 In a speech on Friday, Donald Trump expressed remorse for some of his actions.

"And believe it or not, I regret it," Donald Trump said.

It appears the Trump campaign is making some changes. In a speech on Friday, Donald Trump expressed remorse for some of his previous actions, though he didn't say exactly which ones he regretted.

"Sometimes in the heat of debate and speaking on a multitude of issues, you don't choose the right words," Trump said.

Over the past month, Trump's lost serious ground in the polls to Hillary Clinton. And Trump himself is a reason for a lot of it – whether it's a serious political faux pas or ones that are, frankly, kind of trivial.

As for the serious ones, at the end of July, Trump criticized the Muslim American parents of Humayun Khan, who died in Iraq in 2004, and insinuated his mother wasn't allowed to speak while her husband spoke at the Democratic National Convention.

And then for the trivial, there's the campaign rally earlier this month, outlets reported that Trump asked a woman with a crying baby to leave. While Trump later denied the reports were true, many critics still said he lacks the empathy needed to be the next commander-in-chief.

Paul Manafort, Trump's now-former campaign manager, stepped down on Friday after a week of reported staffing shake-ups. Some supporters say that and Trump's most recent speech signal big changes to come from the campaign.

But we've heard this line before, in April Trump said in regards to personal attacks, he "may tone it down" depending on how "other people punch back."

And in May, Trump met with House Speaker Paul Ryan to address concerns that his divisive statements would make it difficult for Republicans to come together this fall.

"I was very encouraged with what I heard from Donald Trump today. I do believe that we are now planting the seeds to get ourselves unified," Ryan said.

It's still unclear what, if any, long-term changes this re-organized campaign will make. But for now, it appears Trump is at least attempting to alter his narrative.