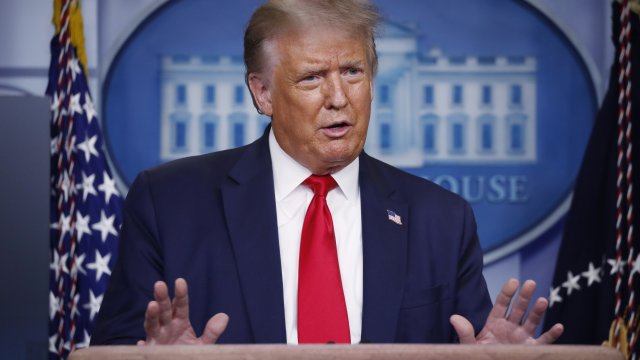 With a new, more focused ad strategy, President Trump's campaign is trying to tie Biden closely to the "radical left."

After a brief pause in running TV ads, the Trump campaign is back on the airwaves with a more streamlined message. The goal? To define presumptive Democratic nominee Joe Biden just three months ahead of Election Day.

What was not working with the messaging that was going out there before with Joe Biden in terms of the TV ads?

"It wasn't that the message wasn't working," said Erin Perrine, director of press communications for Trump 2020. "It was that we are fine-tuning the message now. We've got more data. We've been doing more polling. We're getting those results in. And so these are persuasion ads to talk directly to voters about Joe Biden's policies."

Since Biden secured the Democratic nomination back in April, the Trump campaign has run a number of TV spots attacking the former vice president focused on everything from his record on China, his stance on funding for police and his stamina to be commander in chief.

With public polls showing President Trump trailing both nationally and in battleground states, newly appointed campaign manager Bill Stepien launched an extensive review of the campaign's strategy after he was tapped for the role in July.

"The radical left has taken over Joe Biden and the Democratic party," the ad says.

The Trump campaign tells Newsy its new messaging will focus on attaching Biden to the left wing of the Democratic party, as well as highlight the "silent majority" the campaign says will show up to support the president in November.

Republican strategist Joseph Pinion welcomed the change but says the campaign should also focus on the working-class voters that supported the president in 2016.

"It's an improvement over what they were doing," said Pinion. "For me personally, I just thought that they were kind of rudderless in their approach and they're kind of throwing everything [at] the wall and seeing what stuck. I think the Trump campaign needs to stop focusing on Joe Biden and start focusing on the American people."

Ad monitoring agencies show the president's re-election campaign has recently been focused on reaching supporters nationally watching Fox News. That will accompany ads running on local stations in key states where voting will begin weeks ahead of November 3rd.

"The main goal is to protect the 2016 map and expand upon it," Perrine said. "Our early voting states, however, or North Carolina, Georgia, Florida and Arizona — these are states that are important to President Trump. And so we want to make sure that those people who are casting ballots, those who are voting early in the election, know what's at stake."

And perhaps setting up an epic battle in the TV and digital ad space, the Biden campaign announced it would spend $280 million drawing out a diverse coalition of voters which they are calling the Biden coalition. That ad spending will target at least 15 states across the country.