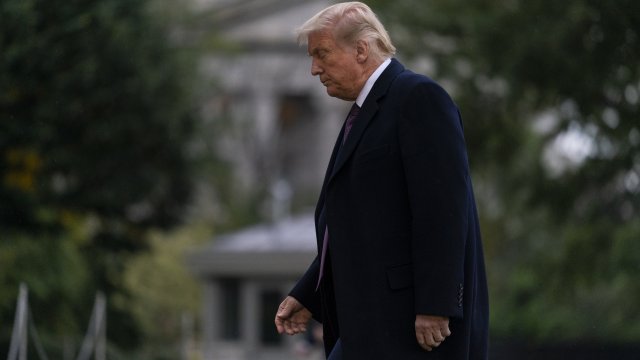 The news comes on the same day as a disappointing monthly jobs report.

The economy was already in peril heading into November, with job losses continuing, and concerns over election security and a lack of stimulus. But President Trump’s COVID diagnosis has created even more uncertainty.

"I don’t think it’s going to have an effect. I think that the president will abide by whatever guidelines the doctors tell him. I am told it’s a rather light case right now," said White House economic adviser Larry Kudlow. "I think this will be over before long. That’s what I hope and pray. I don’t think it has any lasting impact."

There’s an old saying: When the United States sneezes, the world catches a cold. And that might be true here, in an economic sense.

Markets are down across the board, both at home and abroad. The VIX index, which tracks the market’s expectation of volatility, jumped 8%. Now investors—and everyday Americans—are wondering what happens next, and what this means for COVID restrictions.

The news of the president testing positive comes on the same day as the monthly jobs report, showing 661,000 jobs added in September. That’s below what most economists were anticipating. It also shows a slowdown in hiring, as millions of Americans remain out of work due to the pandemic. The national unemployment rate is now 7.9%.

Meanwhile, lawmakers in Washington still haven’t come to an agreement on another round of stimulus. The possibility of a deal is even more unlikely now.