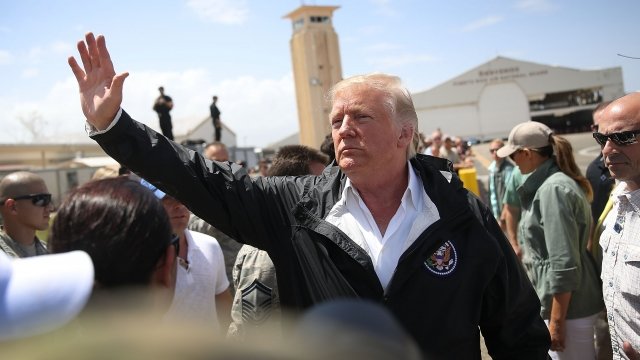 Despite reassurances from the president, vice president and White House chief of staff, critics are wary of the government's promises to help hurricane-sieged Puerto Rico.

Some interpreted the tweet as a warning or threat to take aid services away from the island. Hours later, White House chief of staff John Kelly made an effort to clarify the tweet at a press briefing.

"The tweet about FEMA and DOD — read: Military — is exactly accurate," Kelly said. "They're not gonna be there forever, and the whole point is to start the work yourself out of a job and then transition to the rebuilding process."

Kelly's statement is not untrue, though FEMA does stay involved in disaster relief areas for many years. After more than a decade, it's still involved with relief efforts for Hurricane Katrina.

Critics say Trump's tone toward the aftermath of Hurricane Maria is noticeably harsher than his tone toward hurricanes Harvey, Irma and Katrina — which he's compared Maria to.

According to a recent Quinnipiac Poll, just 36 percent of people surveyed said the Trump administration has "done enough to help" the relief effort in Puerto Rico. That's roughly 20 percent less than the number of people who said the government has done enough in its response to hurricanes Harvey and Irma.

As of Wednesday, people in Puerto Rico are still struggling to find food and clean water. The most recent official death toll is 45.