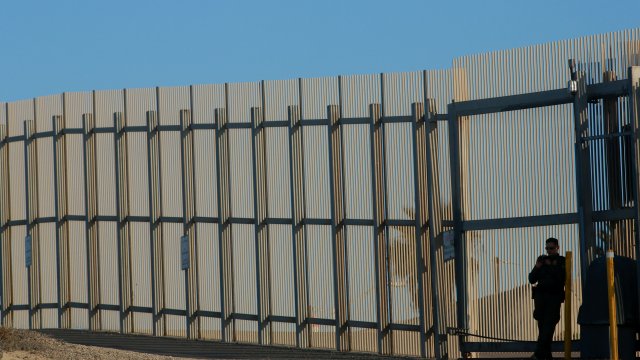 The U.S.-Mexico border has seen a rise in the number of families and unaccompanied children trying to claim asylum in the U.S.

President Trump says immigration at the U.S.-Mexico border has reached a crisis point. But here are some important statistics to keep in mind.

The government's numbers show border crossings are actually much lower than they've been in years past. Border agents apprehended more than 396,000 people on the southwest border in fiscal year 2018. That's up from last year, but it's on the lower end of what that area has seen over the past 20 years.

The border, however, has seen a marked rise in the number of families and unaccompanied children trying to cross: Nearly 40 percent of immigrants caught by Border Patrol last year fell into those two categories.

What Is A Wall? Semantics May Help Move Shutdown Negotiations Forward

And almost all of those family members caught last year came from three countries: Guatemala, Honduras and El Salvador. Gang violence and economic woes have pressured many of those people to try and enter the U.S. and seek asylum.

Those asylum-seekers usually enter the U.S. at official crossings or turn themselves in to border agents. The White House is asking Congress for an additional $800 million to help detain and process this influx of immigrants.

Both parties agree that the U.S.-Mexico border needs to be secured but disagree over how to do it. That disagreement is fueling the ongoing government shutdown, which has furloughed about 800,000 federal workers.