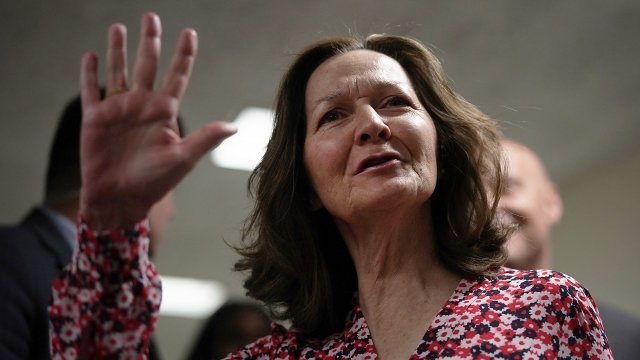 President Donald Trump voiced fresh support for his nominee to lead the CIA after a new report said she wanted to back out.

President Donald Trump was on defense Monday for his nominee to lead the CIA just a day after news broke that she sought to withdraw her nomination.

The Washington Post reported over the weekend CIA Deputy Director Gina Haspel went to the White House on Friday and said she might step aside to avoid a rocky confirmation hearing. Lawmakers on both sides of the aisle have expressed concern over Haspel's involvement in a controversial interrogation program that included waterboarding, which is widely considered torture. The Post says senior White House aides went to Haspel's office to convince her to stay.

Monday morning, Trump said in a tweet Haspel was getting grief "because she was too tough on Terrorists. Think of that, in these very dangerous times, we have the most qualified person, a woman, who Democrats want OUT because she is too tough on terror."

Trump Says Torture Works, But That Doesn't Mean He'll Bring It Back

During an ABC interview, President Donald Trump said he believes torture is an effective interrogation technique and would consider reinstating it.

The president's tweet doesn't specifically say anything about the interrogation program, but it's likely what he's talking about. Either way, his stance here is intriguing — any program involving torture would be widely condemned by the international community. And the CIA program from the early 2000s is often condemned, even by American politicians. More than 150 countries have agreed to a U.N. resolution prohibiting torture. The U.S. was one of those countries. So formally, the U.S. recognizes torture shouldn't be used, even on terrorists.

What's more, the Democrats' concerns stem from more than Haspel's involvement in the interrogation program. In 2005, the CIA destroyed tapes of the interrogations, and Haspel wrote the memo involved in that process, according to the CIA. That said, the CIA said she wasn't at fault because the official order to destroy the tapes came from her boss.

The president's defense of Haspel came the same day she met with senators on Capitol Hill. Her confirmation hearing's set for Wednesday.