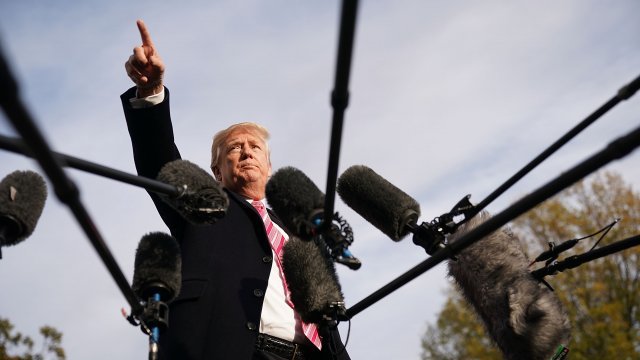 President Donald Trump is defending GOP Senate candidate Roy Moore against allegations that he sexually assaulted teenagers while he was in his 30s.

Trump told reporters Tuesday, "I can tell you one thing for sure, we don't need a liberal person in there, a Democrat," referring to Moore's opponent Doug Jones. When one reporter asked if "an accused child molester is better than a Democrat," Trump replied: "[Moore] totally denies it. He says it didn't happen. And look, you have to listen to him, also. ... And I do have to say, 40 years is a long time."

That's a stark difference from his response to sexual misconduct allegations against Democratic Sen. Al Franken. Referring to a photo of Franken inappropriately touching journalist Leeann Tweeden, Trump tweeted last week: "The Al Frankenstien picture is really bad, speaks a thousand words. Where do his hands go in pictures 2, 3, 4, 5 & 6 while she sleeps?"

Another Woman Has Accused Roy Moore Of Assaulting Her

Beverly Young Nelson says Roy Moore attacked her in his car when she was 16.

Trump didn't go as far as explicitly endorsing Roy Moore on Tuesday. Moore has been asked to step aside by many Republican Senate leaders, while local Alabama politicians largely still support him.