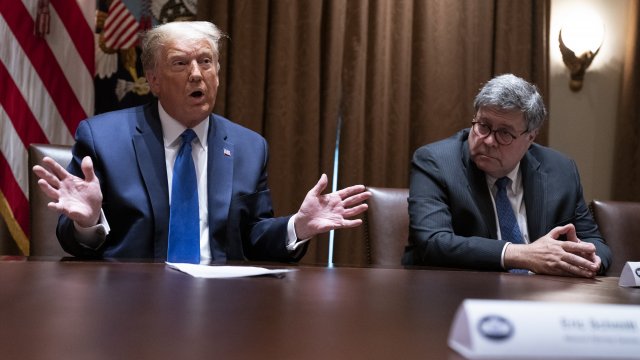 President Trump is urging Republican Attorneys General from a number of states to take up legal changes that could hold tech companies more accountable for how they moderate content.

"The attorney general has invited us to talk about these issues to discuss ways that we might be able to collaborate," said Utah Attorney General Sean Reyes. "If there is evidence of moderators inserting or injecting their own personal biases, then maybe they shouldn't have a full measure of that immunity."

Ahead of the meeting organized by U.S. Attorney Gneral William Barr, the Department of Justice released a new proposal to limit protections offered by Section 230 of the Communications Decency Act. That nearly 25-year-old law grants liability protections to internet platforms for how they choose to moderate content.

Newsy White House reporter Kellan Howell spoke to some of the state AGs attending the meeting. They said the way Section 230 is currently structured could pose a consumer protection issue.

"The whole idea of Section 230 was to give some immunity to technology companies from frivolous types of lawsuits," said Reyes. "Consumers are entitled to understand and know the information they're seeking. They're seeking unbiased information that is truly unbiased."

"If consumers are being mislead by these companies who are biased in one way or the other, that’s a deceptive trade practice," said Texas Attorney General Ken Paxton.

Trump and other top Republicans have also accused tech companies of using the law to moderate conservative content in a biased manner. Attorneys General at the meeting told Newsy they wanted to help figure out a way to change section 230 to give their consumers more insight into how content is moderated.

“The concern, as it has been expressed to me, is that political views are a driver for people to be taken off of political platforms," Reyes said.

Democrats and Republicans agree that Section 230 gave social media companies too much content moderation power. But they can't agree on a fix.

But some experts think that this is less about transparency and more about jostling for content moderation practices favorable to one side or another. Democrats also want to change Section 230, but for different reasons, including a tighter rein on what they consider hate speech and misinformation.