Bannon-Trump Fight Could Splinter GOP's Populist Base In 2018 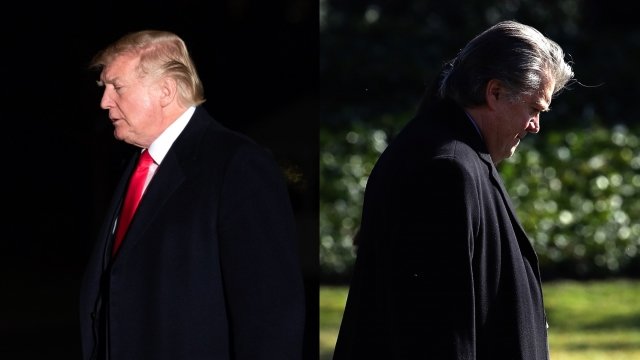 It could come down to who that base sees as its leader.

If you've been paying even a little bit of attention to D.C. lately, you know there is one relationship that is most definitely in the middle of a breakup: President Trump and Steve Bannon.

In just about 24 hours, Bannon and Trump went from brothers-in-arms to a full-on civil war. It all stemmed from a new book where Bannon is less than complimentary of the Trump team and kids, especially Donald Trump Jr. And the big dust-up seems to be ruining Bannon's second act.

"He basically wants to reorient the GOP from being a conservative party, that stands for small government above all else, to being this sort of populist party," Politico's Kevin Robillard told Newsy recently.

Since being fired from the White House, Bannon has been going around the country endorsing GOP candidates that match his vision of the party, promising to primary almost every incumbent senator. He's especially interested in candidates who are willing to go against Senate Majority Leader Mitch McConnell.

"When Bannon first left the White House and was sort of assembling this team, everyone wanted his endorsement, and now that endorsement has really quickly soured," Robillard said.

Bannon was hoping to be the GOP kingmaker, leading any candidate he chose to a victory. But other than Trump, his candidates haven't done well. And now that Trump, who used to champion Bannon's vision, is moving against him, the rest of Bannon's power is draining and draining fast.

The GOP has already been splintered for some time between the establishment and Republicans in the vein of Trump and Bannon. This new rift could test how strong the latter group is and who they see as their leader. But it also depends on how long this rift lasts; the president is pretty famous for making up with former advisers.

During an election year, the GOP has a possibly controversial list of legislative agenda items.

Some of the establishment has been celebrating the newest Bannon-Trump feud as proof the 2018 primary season may not be as bloody as they thought. But they probably shouldn't breathe too easily just yet.