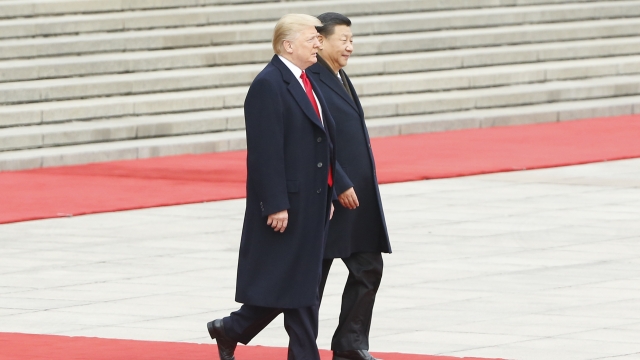 President Trump tweeted Wednesday that he has "zero doubt" his Chinese counterpart could "humanely solve the Hong Kong problem."

President Donald Trump floated the idea of holding a "personal meeting" with his Chinese counterpart to discuss the ongoing protests in Hong Kong.

Hong Kong is semi-autonomous and operates under different systems than mainland China. The region was guaranteed its own social, legal and political framework for at least 50 years when the former British colony was handed back over to China in 1997.

Thousands of anti-government demonstrators have been protesting in Hong Kong for 10 consecutive weeks. They initially began protesting over a now-suspended extradition bill, which would have allowed China to extradite suspects from Hong Kong. The demonstrations have grown to include issues like police brutality and calls for Hong Kong's leader Carrie Lam to step down.

But protesters have frequently been clashing with police. And Lam warned on Tuesday that the demonstrations have "pushed Hong Kong to the brink of no return."

China's repeatedly stood behind law enforcement crackdowns on the protesters. It condemned recent demonstrations at the Hong Kong airport as "near-terrorist acts."

President Trump's tweet came just hours after the State Department said it was concerned by reports on China moving troops close to the border with Hong Kong. The department urged China to respect Hong Kong's autonomy.