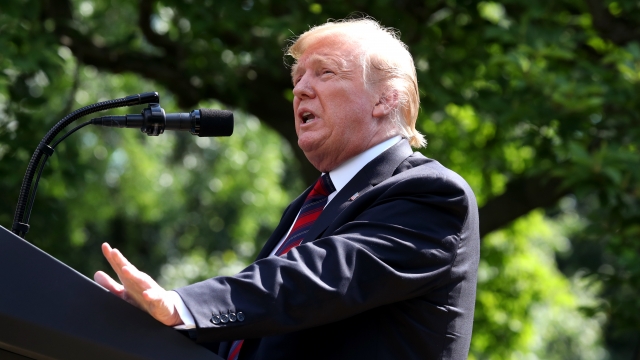 The president has said he'll build a border wall, cancel funding for sanctuary cities and remove undocumented immigrants, among other things.

President Donald Trump has promised to make big changes on immigration since he was a candidate.

"The truth is our immigration system is worse than anybody ever realized," the president said.

We'll cover the border wall and DACA in separate stories, but here's a closer look at some of these other promises.

"There are vast numbers of additional criminal illegal immigrants who have fled, but their days have run out in this country. The crime will stop. They're going to be gone. It will be over," the president said.

In a series of tweets in June 2019, the president reiterated that promise. He said Immigration and Customs Enforcement would "begin the process of removing the millions" of undocumented immigrants. In total, ICE removed over 267,000 people in fiscal year 2019, a slight increase from the year before.

"Cities that refuse to cooperate with federal authorities will not receive taxpayer dollars," President Trump said.

Los Angeles sued the DOJ after it was passed over for a community police grant. The case went back and forth in court, and in July 2019, the 9th U.S. Circuit Court of Appeals ruled that the Trump administration can give preferential treatment when awarding grant money to cities that use it to combat illegal immigration.

Let's go back to President Trump's first few days in office: On Jan. 27, 2017, he signed an executive order banning travel from seven Muslim-majority countries. The order was quickly challenged and met with nationwide protests. The White House revised the order two times and a revised ban eventually made it to the Supreme Court, which upheld it in June 2018.

"When politicians talk about immigration reform, they usually mean the following: amnesty, open borders, lower wages. Immigration reform should mean something else entirely," President Trump said. "It should mean improvements to our laws and policies to make life better for American citizens."

President Trump has also looked at limiting legal immigration. In September 2017, the State Department said it wanted to cap the number of refugees admitted to the U.S. at 45,000 for the 2018 fiscal year. That was the lowest since the refugee program was created in 1980. The Trump administration decreased that cap again in each of the next two years. For fiscal year 2020, the U.S. has a refugee admissions ceiling of 18,000.

In May 2019, the president outlined his plan to overhaul the U.S. immigration system. The heart of the proposal was the creation of a merit-based point system aimed at prioritizing skilled workers in the immigration process.

That proposal has since stalled. But in August, the Trump administration issued its so-called "public charge" rule. It prevents people from getting green cards and visa extensions if they use or are deemed likely to use public benefits in the future. Federal judges temporarily postponed the rule while it faced legal challenges, and in late January, the Supreme Court said the rule should be allowed to take effect.

Finally, in the latter half of 2019, the U.S. entered into asylum agreements with Honduras, Guatemala and El Salvador. It's part of the Trump administration's goal to limit the number of migrants entering the U.S. at the southern border. Under those deals — which are often referred to as "safe third country" agreements — the U.S. will send migrants to apply for asylum in those countries — regardless of whether they actually passed through on the way to the U.S. The Guatemala deal is in effect after several legal challenges, but the Honduras and El Salvador agreements aren't being enforced yet.