Trump Plans Next Move To 'Confront The North Korean Threat' 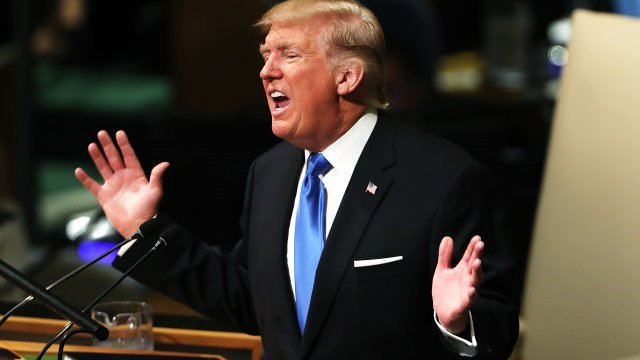 President Trump isn't backing down from his fight with North Korea, in fact, he's upping the odds.

On Friday, the White House announced Trump will travel to five Asian countries to "strengthen the international resolve to confront the North Korean threat and ensure the complete, verifiable, and irreversible denuclearization of the Korean Peninsula."

Tensions have increased between the two countries since Trump took office but recently escalated during the United Nations General Assembly.

"The United States has great strength and patience, but if it is forced to defend itself or its allies, we will have no choice but to totally destroy North Korea. 'Rocket Man' is on a suicide mission for himself and for his regime," Trump said on Sept. 19 while addressing the U.N.

His comment evoked North Korea's Foreign Minister Ri Yong-ho to respond with a string of insults toward Trump, including "mentally deranged" and "President Evil." Ri continued to claim Trump "committed an irreversible mistake of making our rockets' visit to the entire U.S. mainland inevitable all the more."

The growing conflict is strongly linked to North Korea's multiple missile tests. Since February, the country has launched 22 missiles.

Missile tests aren't uncommon, but the amount and rate is unprecedented for North Korean leader Kim Jong-un. In July, that concern increased when the country tested its first intercontinental missile.

Over the past few months, Trump's tweets have turned from insults to threats.

Now, Trump is starting to transform his words into economic action rather than military might. He signed an executive order increasing the Treasury Department's power to target people or entities conducting business with the country. This comes as an attempt to decrease North Korea's international trade and cut funding for its weapons program.

North Korea's main trading partner, China, also ordered North Korean businesses within its borders to close by January. That move is complying with the U.N.'s decision to increase sanctions in early September.