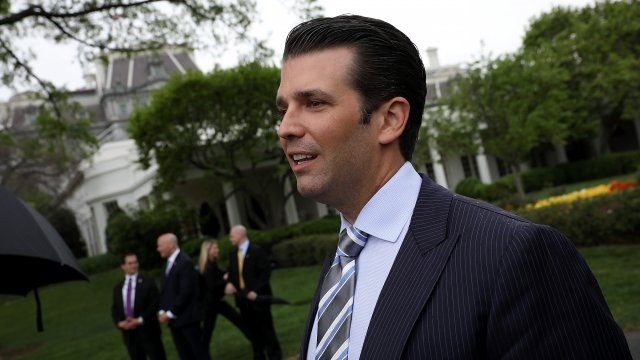 Trump Jr. originally said he only talked about Russian adoptions with a lawyer connected to the Kremlin.

During his father's presidential campaign, Donald Trump Jr. met with a Russian lawyer who he says promised information that could potentially hurt Hillary Clinton.

The New York Times first reported on Trump Jr.'s meeting with Natalia Veselnitskaya, a Kremlin-connected lawyer, on Saturday. The meeting was reportedly held at Trump Tower in June 2016. The president's son-in-law Jared Kushner and then-campaign manager Paul Manafort were also in attendance.

At that point, the Times didn't have information on what was talked about in the meeting. In a statement, Trump Jr. said they talked about Russian adoptions, noting it "was not a campaign issue."

But a day later, both the Times and Trump Jr. changed their stories.

Five anonymous sources with knowledge of the meeting told the Times that Trump Jr. agreed to meet with the lawyer after being promised "damaging information about Hillary Clinton."

More than half of states have refused to provide additional information for the federal investigation into voter fraud.

In a new statement to the Times, Trump Jr. acknowledged the lawyer told him "individuals connected to Russia were funding the Democratic National Committee and supporting Mrs. Clinton." He said the information didn't pan out.

"Her statements were vague, ambiguous and made no sense. No details or supporting information was provided or even offered," Trump Jr. continued.

He said Veselnitskaya then changed the conversation to adoption. In his statement, Trump Jr. said, "It became clear to me that this was the true agenda all along and that the claims of potentially helpful information were a pretext for the meeting."

U.S. officials have already confirmed Russia meddled in the 2016 election. The FBI is now investigating links between President Trump's campaign team and Russia.

A spokesman for Trump's legal team said "the president was not aware of and did not attend the meeting."