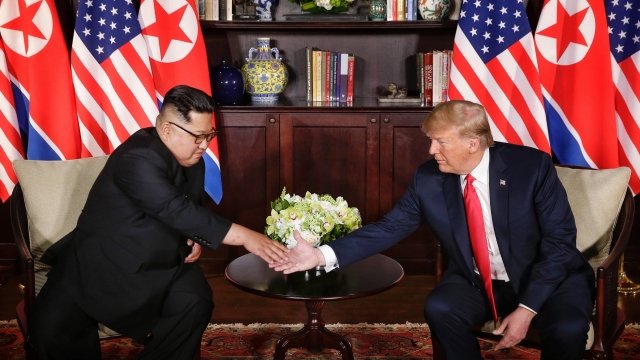 Both leaders committed to "recovering POW/MIA remains, including the immediate repatriation of those already identified."

President Donald Trump and North Korean leader Kim Jong-un have agreed to recover the remains of prisoners of war and those missing in action from the Korean War.

In a joint statement signed at the end of their historic summit in Singapore, both leaders committed to "recovering POW/MIA remains, including the immediate repatriation of those already identified."

Ahead of Tuesday's summit, the Veterans of Foreign Wars sent a letter to Trump urging him to discuss a potential repatriation agreement with Kim.

The letter read, in part, "We urge you to do everything in your power to ensure that those who paid the ultimate price for freedom during the Korean War are finally returned home to their families."

According to the Defense POW/MIA Accounting Agency, about 7,700 U.S. military personnel are still unaccounted for from the Korean War. And the remains of an estimated 5,300 Americans are still in North Korea.