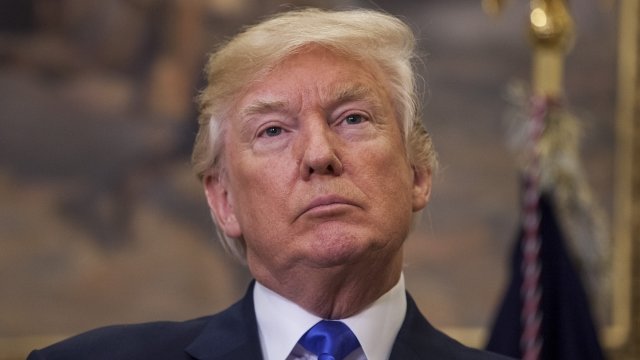 A lawyer wants to halt publication of a new book called "Fire and Fury: Inside the Trump White House," according to The Washington Post.

President Donald Trump apparently isn't too happy about a new book detailing his first year in the White House.

According to a Washington Post story, a lawyer representing Trump is trying to stop the book from being published. It's called "Fire and Fury: Inside the Trump White House" by Michael Wolff.

The Post says the attorney sent a letter to the publisher, demanding the company "immediately cease and desist from any further publication, release or dissemination of the book," including excerpts and summaries.

Report Says Trump Administration Will Cut Off Some Aid To Pakistan

After U.S. officials threatened to cut off aid, a Reuters report says the administration will make it official soon.

The publisher describes the book as "explosive," adding, "Thanks to his deep access to the West Wing, bestselling author Michael Wolff tells the riveting story of how Trump launched a tenure as volatile and fiery as the man himself."

In an article published online Thursday, Wolff details just what type of "deep access" he had to the West Wing, painting a picture of all the executive office staffers who were "neatly accessible."

The book isn't scheduled to be released until next week. But excerpts published Wednesday had some harsh quotes about Trump from former White House chief strategist Steve Bannon.

Trump responded to Bannon's comments by saying, "When he was fired, he not only lost his job, he lost his mind."