Is The Trump-Macron Bromance On? 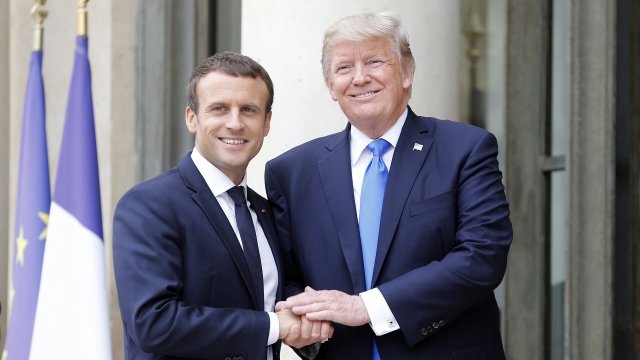 Besides the never-ending handshakes, what do these two world leaders have in common?

Something viral seems to come out of every meeting between U.S. President Donald Trump and French President Emmanuel Macron — at least when the cameras are rolling.

So get ready for another round as Trump hosts Macron and his wife in the White House. Besides being the first world leader Trump has invited for an official state visit, the young French president will also be the first head of state to address a joint session of Congress since Trump's election.

The increasingly embattled French president reportedly plans to try to sway Trump on issues like trade and the Iran nuclear deal.

All of this obviously leads to one very crucial question: Is the Trump-Macron bromance on? To find out, we sat down with Charles Lipson, a political science professor at the University of Chicago.

Besides dissecting the Trump-Macron relationship, Lipson also explained how the relationship between the U.S. and France has improved since the "freedom fries" era and why France is considered America's oldest ally.

NEWSY'S BEN SCHAMISSO: Beyond those viral moments, beyond the long handshakes, what is it in terms of policy that these two have in common?

CHARLES LIPSON: Trump, for all of his nationalism and all of that in many ways, is behaving like a conventional Republican president: You cut taxes, and you deregulate.

SCHAMISSO: And that's an area where they will see eye to eye?

LIPSON: Right, and you have a strong military. Only Britain and France are actually willing to use force beyond their borders. And we do see that in the Middle East, especially with regard to Syria — not only a common sense of policy but also a willingness to pay a price to do that.

I think the other part is that Trump is looking for a primary European ally. If he's not going to be dealing primarily with German Chancellor Angela Merkel, Britain is pulling out of the EU — who's really his best option? I would say Macron.

What I don't know, I think, is how Macron thinks the EU should behave with respect to the U.S. on major issues, like trade and competition policy.

Final point: I think that he probably thinks of Macron as a disrupter like himself.

SCHAMISSO: Trump sees a bit of himself in Macron?

LIPSON: They're both people who, in a sense, came from the outside and built their own party.

The one thing I would guard against: Most of the time when you see a relationship that's positive or negative, you think it will last. In Trump's case, he can turn on a dime. But I suspect he really does want a strongly positive relationship and sees that with him in a way that he might not see with another young leader, which would be, say, Canadian Prime Minister Justin Trudeau. Because Trudeau governs from the left, whereas Macron governs from the center-right. No more freedom fries."

SCHAMISSO: Freedom fries are just a thing of the past?

LIPSON: Well, first of all, it was ridiculous when we renamed french fries as freedom fries. When the United States went into Iraq under George Bush, France didn't just oppose it; it publicly opposed it and went around the world trying to gather an anti-American coalition. Turns out, France was right, yeah, but you can imagine it wasn't just that George W. Bush who didn't appreciate it. Americans took that as not a friendly effort. If you were to say "freedom fries" today, people would just laugh.

SCHAMISSO: "France is our oldest ally": You hear that from every American president. Is it accurate, and where does it come from?

LIPSON: When George Washington defeated the British at Yorktown, he did so with the crucial aid of the French Navy and, to some extent, French armed forces on the ground. I would say that none of that is carried down to a modern American. When we say France is America's oldest ally, most Americans would take that is breaking news. They just wouldn't know.