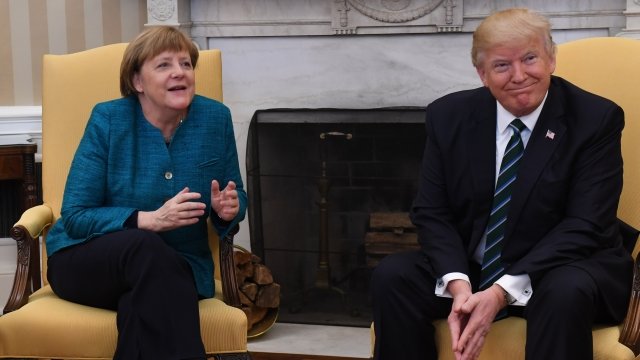 Trump's meeting with German Chancellor Angela Merkel will likely be very different from his meeting with French President Emmanuel Macron.

A fancy state dinner, a formal address to Congress and a fife and drum corps welcome are not on the agenda for German Chancellor Angela Merkel's White House visit.

This Trump-Merkel meeting will mostly be strictly business. The two are expected to discuss a range of issues, but perhaps the two most important will be trade and Iran.

On May 1, the exemption the Trump administration gave to some European countries on imported steel and aluminum tariffs expires. German officials reportedly expect the U.S. to implement the tariffs, which could hit the country's auto industry especially hard.

Then on May 12, the Iran nuclear deal expires. Merkel, like Emmanuel Macron, does not appear to be in favor of redoing the entire deal, which Trump says he wants. So she too hopes to encourage Trump to keep it in place.

This will be Merkel's second trip to Washington, D.C., since Trump became president and her first since being re-elected last month as chancellor.