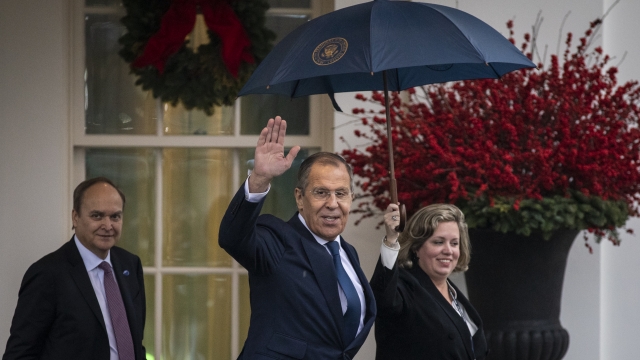 Secretary of State Mike Pompeo joined President Trump for the Oval Office discussion, which was closed to the press.

Secretary of State Mike Pompeo joined President Trump for the Oval Office discussion, which was closed to the press. The exclusion of the White House press corps is notable because of the controversy surrounding Lavrov's previous White House visit.

In their May 2017 meeting, President Trump allegedly shared highly classified information with Lavrov and then-Russian Ambassador to the U.S. Sergey Kislyak. The American press was also kept out of that meeting, but Russian state-run media was allowed to document it.

Prior to the Oval Office meeting, Pompeo and Lavrov held a bilateral meeting at the State Department. The two discussed a range of issues, including Syria, the Iran nuclear deal, and North Korean denuclearization.

Tuesday's meetings came on the heels of a Justice Department watchdog report that found no evidence of partisan bias in the FBI's investigation of Russian election meddling.

The meeting also came just hours after House Democrats announced two articles of impeachment against President Trump. And those accusations of wrongdoing stem, in part, from the president *not* having a White House meeting with Ukrainian President Volodymyr Zelenskyy.