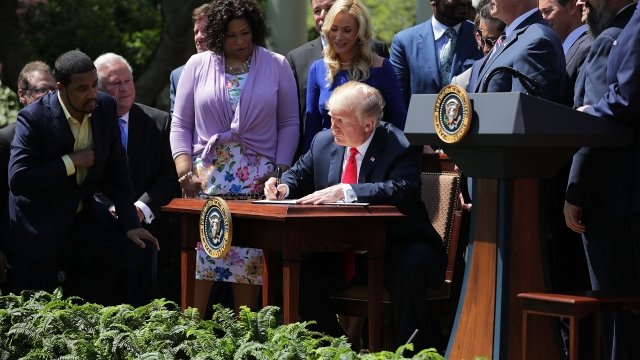 An office like this isn't brand-new to the White House, but some of the wording in President Trump's order has LGBTQ advocacy groups concerned.

On the National Day of Prayer, President Donald Trump announced a new White House organization — the Faith and Opportunity Initiative.

"This office will also help ensure that faith-based organizations have equal access to government funding and the equal right to exercise their deeply held beliefs," Trump said.

Offices like this aren't uncommon in the White House. Presidents Barack Obama and George W. Bush signed similar executive orders. But Trump's order is about more than just access to federal funds.

This group will be on the lookout for any executive branch action that fails to "comply with protections of Federal law for religious liberty," and it will "identify and propose means to reduce ... burdens on the exercise of religious convictions."

Those goals have some LGBTQ advocacy groups concerned. Phrases like religious liberty and religious freedom are sometimes used to defend actions that the LGBTQ community and supporters view as discriminatory.