Trump Says He Can Tell U.S. Companies To Find Alternative To China 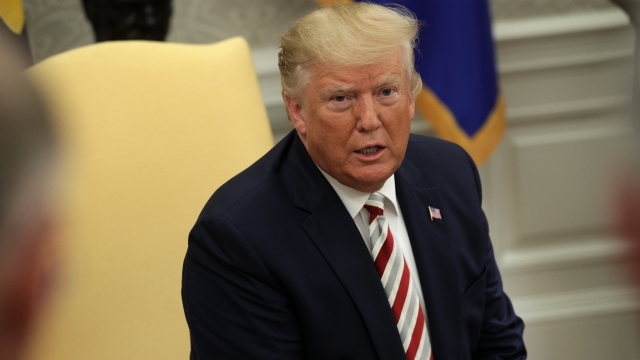 The president told U.S. companies to start looking for an alternative to China in response to the country imposing retaliatory tariffs on U.S. goods.

President Donald Trump says he has an "absolute right" to "order" U.S. companies to stop doing business with China, citing the International Emergency Economic Powers Act of 1977. But it's not really clear how far the president's authority goes under the law.

According to a March 2019 report from the Congressional Research Service, the IEEPA gives the president "broad authority to regulate a variety of economic transactions following a declaration of national emergency."

On Friday, the president ordered U.S. companies to "immediately start looking for an alternative to China."

The president made the comment in a slew of tweets in response to China imposing retaliatory tariffs on $75 billion worth of U.S. goods, including cars, auto parts and crude oil.

He demanded that American companies start making their products in the U.S. saying, "We don't need China and, frankly, would be far better off without them."

He also ordered postal carriers, "including Fed Ex, Amazon, UPS and the Post Office, to SEARCH FOR & REFUSE all deliveries of Fentanyl from China." China agreed to designate fentanyl as a controlled substance late last year. In 2016, the substance surpassed heroin as the leading cause of drug overdose deaths in the U.S.