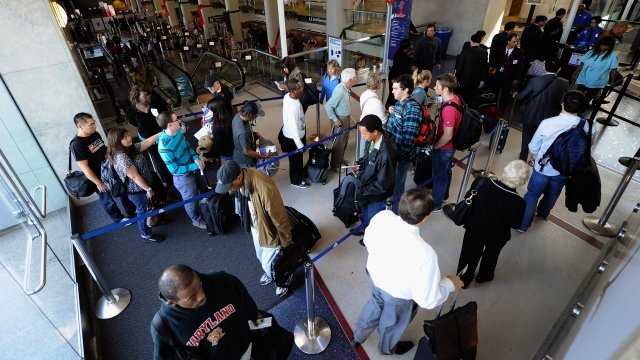 The new order is based on a Department of Homeland Security review of immigration screening procedures.

After more than six months of protests, lawsuits and court decisions, the Trump administration is replacing its controversial travel ban with "tailored travel restrictions."

The countries affected include Chad, Iran, Libya, North Korea, Syria, Venezuela, Yemen and Somalia. Travel will be broadly suspended for nationals from most of those countries. Additionally, travelers from Iraq will face heightened scrutiny if they wish to enter the U.S.

The new order is based on a Department of Homeland Security review of immigration screening procedures. The department developed a minimum baseline of information countries must share with the U.S. for their citizens to enter the country. The new travel restrictions are for some countries that don't meet that minimum.

Earlier this month, an anonymous official told The Wall Street Journal, "The goal is to get people into compliance so that we know who's going into the country, so we can keep the bad people out."

These travel restrictions do not apply to lawful permanent U.S. residents or foreign nationals traveling on diplomatic visas. Additionally, visitors who currently have valid visas from the listed countries won't have their visas revoked.

The Supreme Court blocked a lower court's ruling on refugees who have formal assurances from resettlement agencies.

President Donald Trump hinted at the new policy earlier this month after a terrorist attack in London. Trump tweeted, "The travel ban into the United States should be far larger, tougher and more specific."

The new policy is already affecting the legal challenges to the original order. On Monday, the Supreme Court canceled oral arguments it scheduled for October. The court asked all parties to file briefs by Oct. 5 on whether the cases are now moot.

Because of the specificity of the restrictions and the fact that some non-Muslim countries were added, some argue the travel ban replacement could be easier to defend in court. The new travel restrictions go into effect Oct. 18.