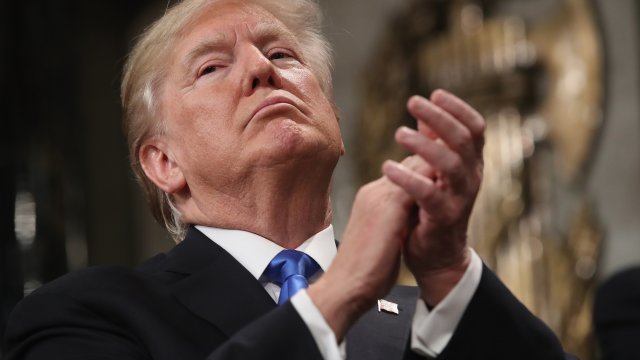 President Donald Trump is calling for Republicans to compromise to pass immigration reform — or dedicate themselves to electing more Republicans.

At a speech during a retreat for GOP lawmakers Thursday, Trump said, "We're going to have to compromise unless we elect more Republicans, in which case we can have it just the way everybody in this room wants it."

Trump has repeatedly blamed Democrats for failed immigration reform efforts, despite his rejection of a bipartisan immigration deal which contributed to a three-day government shutdown.

He continued to blame Democrats in a tweet Thursday that said: "March 5th is rapidly approaching and the Democrats are doing nothing about DACA. They Resist, Blame, Complain and Obstruct - and do nothing. Start pushing Nancy Pelosi and the Dems to work out a DACA fix, NOW!"

Trump laid out a framework for immigration reform that would include a pathway to citizenship for 1.8 million young undocumented immigrants if Democrats concede on funding the so-called border wall and ending the visa lottery program, among other things.

Trump's comments come as the Deferred Action for Childhood Arrivals program is set to end March 5. Though, a judge ruled last month DACA can't end until legal battles surrounding the program are resolved.