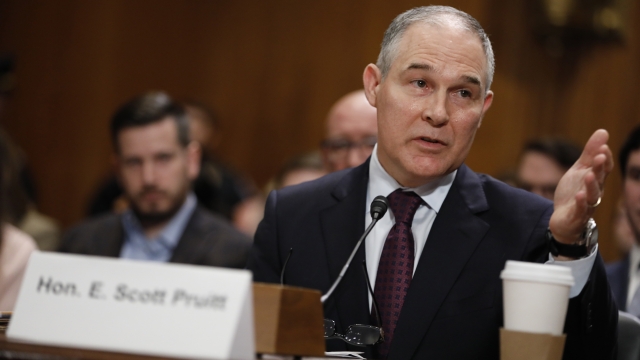 During his Senate confirmation hearing, Scott Pruitt said the climate is changing, which differs from what he's said on the subject in the past.

Scott Pruitt is Donald Trump's pick to head the Environmental Protection Agency, and during Pruitt's confirmation hearing Wednesday, he didn't deny climate change exists. But that seems to differ from what he's said before.

"Science tells us that the climate is changing and that human activity in some manner impacts that change," Pruitt said. "The ability to measure with precision the degree and extent of that impact and what to do about it is subject to continuing debate and dialogue, and well, it should be."

In an opinion piece for the National Review last year, Pruitt argued the science behind global warming is a debate that's "far from settled."

And, as Oklahoma's attorney general, he filed multiple lawsuits against the EPA that challenged environmental protections.

So Sen. Ed Markey of Massachusetts wanted to have Pruitt's apparent change of opinion clearly on the Senate record.

"I do not, senator," Pruitt responded.

"I do not believe that climate change is a hoax," Pruitt responded.

The vast majority of climate scientists — 97 percent or more, in fact — say climate change is real and linked to human activity.