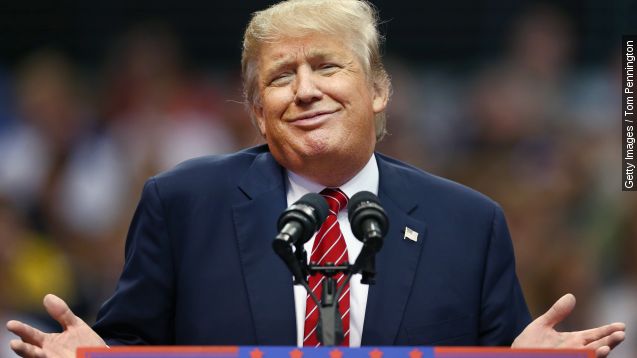 ISIS arguably thrives off of conflict between Muslims and the West, and Donald Trump would give the terrorist organization exactly what it wants.

"Donald J. Trump is calling for a total and complete shutdown of Muslims entering the United States," Donald Trump said during a rally in Mount Pleasant, South Carolina.

But isn't that exactly what ISIS wants?

"My brothers, how can you answer to Allah when you live on the same street when you are using their lights and you are paying taxes to them?" asked a narrator in an ISIS propaganda video.

ISIS consistently casts its fight against Western nations as a "Holy War" between Muslims and infidels.

The group often makes claims that Muslims are being mistreated in the Western nations and that they should come to ISIS' self-declared caliphate.

"My message to all sincere Muslims ... come forward to build this Caliphate," said a member of ISIS.

In the past, the group has made calls for Muslim refugees fleeing Syria and Iraq to come to its territory instead. (Video via UNHCR)

Barring Muslims from entering the U.S. feeds into this narrative — that they're second-class citizens or that the West doesn't trust them.

Ultimately, an us-versus-them mentality helps ISIS. It alienates Muslims, which in turn can drive recruitment for the terrorist organization.

"And the reason we only have 250 or so people from the United States who have gone to join ISIS is because, by and large, they feel like they are getting a fair shake and they have a shot at the American dream. If you change that equation, you will change the numbers," Richard Engel said on MSNBC.

And with a policy that would, well, literally makes it us-versus-them situation. Banning Muslims from entering the U.S. would be doing ISIS a big favor.