Trump's 'Silent Majority' Is Built On Persona, Not Policy 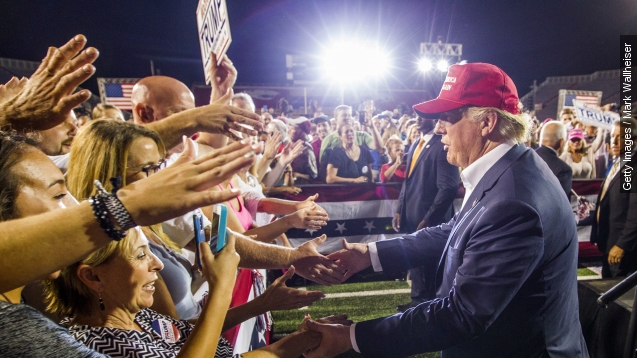 Donald Trump says he appeals to the "silent majority" of voters, but his supporters are attracted to Trump's personality more than his policies.

"The silent majority is back, and we’re going to take the country back!" Donald Trump said at a rally in Arizona.

Republican presidential hopeful Donald Trump likes to use the phrase "silent majority" when talking about his supporters.

"And so tonight, to you, the great silent majority of my fellow Americans, I ask for your support," former president Richard M. Nixon said.

The term was first popularized by President Nixon, who cast his supporters against the very vocal protesters who had dominated the media. Nixon's "silent majority" helped him counter the influence of anti-Vietnam War demonstrations and the counterculture.

"You have a silent majority in this country that feels abused, that feels forgotten, that feels mistreated," he told reporters.

But although Nixon marshaled his majority around policy issues like the Vietnam War, Trump's silent majority is unified by only one thing: Trump himself.

Trump supporters mostly like to talk about his billionaire businessman persona: he's outspoken, he's authentic and he can't be bought with anyone else's money.

But so far, polling hasn't identified anything distinctive about Trump’s supporters: his demographic base broadly matches up to the rest of the Republican candidates, and his supporters hold many different political beliefs.

The New York Times suggests polls can't pin down Trump's coalition because his silent majority "is not tethered to a single issue or sentiment. … Trumpism, the data and interviews suggest, is an attitude, not an ideology."

"I'm tired of politicians, I’m tired of the sugar-coating that they tell us that they're going to fix this economy," one Trump supporter told CNN.

This personality-driven campaign also explains why Trump has been able to withstand gaffes that would have sunk any other politician. His supporters see brash, offensive statements as a sign that Trump isn't afraid to say what he really thinks.

And that could spell trouble for other candidates hoping to win over Trump supporters. They can't afford to compete with him on policy alone: they have to challenge him on personality and authenticity as well.

Pundits are still divided on whether Trump's campaign is a flash in the pan. But the "silent majority" he's stirred up will likely still be around in 2016, and their voices could have a huge impact on how the election plays out.