Why Trump's Suggestions To Police Worried Some 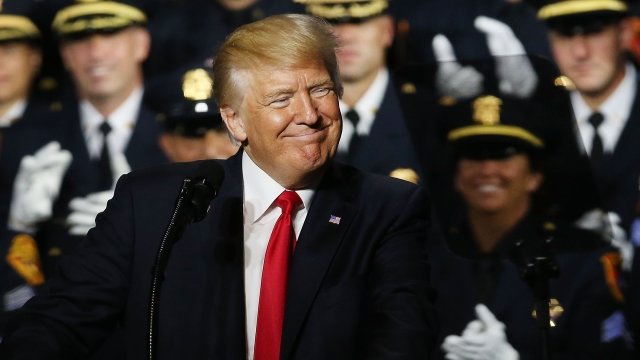 Critics say President Donald Trump advocated for police violence and excessive force — which some say is already a national issue.

"When you see these thugs being thrown into the back of a paddy wagon — you just see them thrown in, rough — I said, please don't be too nice," Trump said. "Like when you guys put somebody in the car and you’re protecting their head, you know, the way you put their hand over? Like, don’t hit their head and they've just killed somebody. ... I said, you can take the hand away, OK?"

Many interpreted Trump's comments as advocating police violence and excessive force, which experts say is already a national issue.

Back in 2010, the National Police Misconduct Reporting Project — a project of the Cato Institute — found the most common type of police misconduct was the use of excessive force.

In 2015, the U.S. Department of Justice ruled the Chicago police department — one of the largest in the country — had "engaged in a pattern or practice of unreasonable force — including deadly force."

Trump's comments didn't sit well with some police departments. A couple took to social media to emphasize rules regarding the use of force.

The International Association of Chiefs of Police also responded on its website, writing, "Law enforcement officers are trained to treat all individuals, whether they are a complainant, suspect, or defendant, with dignity and respect."

How Should Police Handle Children When Detaining Their Parents?

A Justice Department report says police should ensure children don't experience trauma when their parents are detained or arrested.

Policies exist to limit police use of excessive or deadly force. But critics say the law also protects officers who kill in the line of duty.

The Washington Post, which tracks officer-involved shootings, reported more than 2,500 people have been shot and killed by police over the past three years. But since 2005, only 80 officers have been arrested for on-duty fatal shootings. So far, only 28 have been convicted for murder or manslaughter.