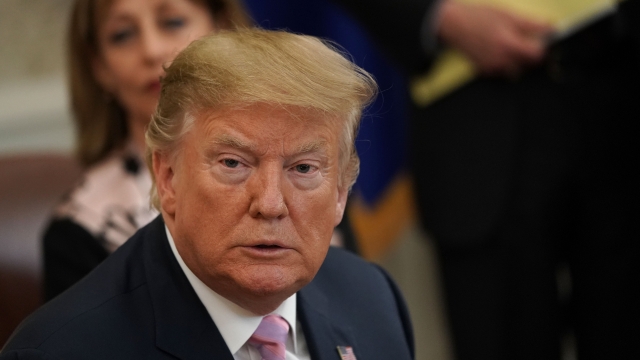 ​President Trump denied that he was considering bringing back migrant family separations and ​blamed former President Obama for the policy.

President Donald Trump said his administration is not looking to reinstate the practice of separating migrant families at the U.S.-Mexico border.

The president denied that his administration was considering bringing back family separations during a meeting with the president of Egypt on Tuesday, and he blamed former President Barack Obama for the policy.

But the president added that the end of the family separation policy is the reason there's been a recent increase in migrants coming through the border.

President Trump's comments came on the same day that U.S. Customs and Border Protection released its March Southwest border migration statistics. According to the data, "[over 90,000] people were apprehended between ports of entry on the Southwest Border" in March. That's more than double the number of apprehensions reported in March 2018. CBP officials also said there's been "more than [a] 370 [percent] increase in the number of family units apprehended compared to the same time [last year]."

The White House also released a statement Tuesday after a federal judge blocked the administration's policy of sending some asylum-seekers to Mexico to wait out their immigration hearings. According to the statement, the Trump administration "intend(s) to appeal" the preliminary injunction, and "will take all necessary action to defend the Executive Branch's lawful efforts to resolve the crisis at [the] southern border."