Trump: Peace Talks With Taliban Are 'Dead, As Far As I'm Concerned' 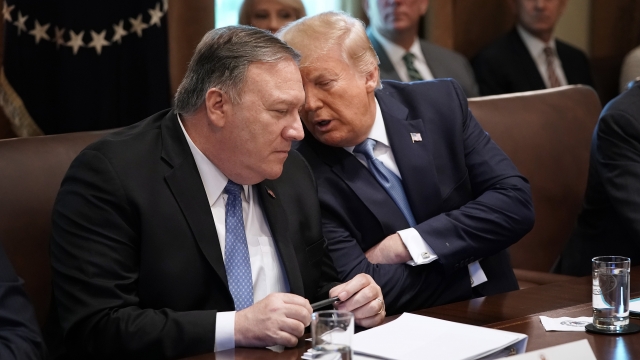 The president called off a Camp David meeting with Taliban and Afghan leaders over the weekend.

"If it's not right, if it's not protecting the American people, if the conditions aren't appropriate on the ground and proper to protect America, we're not going to enter into any deal."

That's U.S. Secretary of State Mike Pompeo telling CNN's Jake Tapper why the Trump administration withdrew from peace talks with Taliban leaders on Sunday. On Monday, the president said any such negotiations were "dead, as far as I'm concerned."

But President Trump said he suspended the meeting because the Taliban had claimed responsibility for a suicide bombing in Kabul last week. The attack killed at least 10 Afghan civilians and one U.S. service member. Taliban negotiators had reportedly said they'd travel to the U.S. only after a deal had been inked, and only to meet with the Trump administration.

The Afghan government is not recognized by the Taliban, nor has it been privy to the yearlong talks between U.S. and Taliban negotiators.

Further complicating matters were reports that the White House is divided over whether the negotiations are even necessary to end the 18-year war in Afghanistan. But last week, U.S. envoy Zalmay Khalilzad said the accord had been "finalized in principle."

Under the proposed deal, the U.S. would gradually withdraw thousands of troops in exchange for guarantees that Afghanistan would not serve as a base for attacks on the U.S. or its allies.

The Afghan government has said that proposal could destabilize things on the ground. President Ashraf Ghani, who's up for reelection, has urged the Taliban to hold peace talks directly with his government.

Thousands of Afghans have been killed or injured over the course of the U.S.-led campaign. On Monday, Ghani renewed his call for a cease-fire, saying his country is "now at a critical juncture because of the election and the peace process."