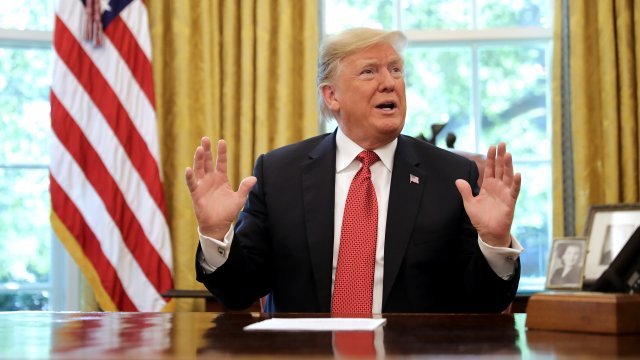 The president won't deliver on his promise to pass new cuts by Nov. 1, but he said he'll introduce something in the coming weeks.

Despite previous statements, President Donald Trump said Monday there will be no new tax cuts before the midterm elections.

Trump told reporters Saturday a new tax package would be unveiled before Nov. 1, but he's now walked that back. Still, he said he and his fellow Republicans do plan to introduce something in the next couple of weeks.

Although there aren't many details on the plan just yet, Trump said he wants it to cut taxes for middle class Americans by about 10 percent. That's in contrast to the tax breaks that kicked in back in January, which mostly benefited businesses and the wealthy. Trump also said House Speaker Paul Ryan is involved in drafting the plan.

According to Politico, the president's new tax plan came as a surprise to those in the House and Senate — many lawmakers have returned to their home states to campaign and weren't planning on voting on new legislation until after midterms.